Another stale soulless film from Hollywood’s stagnant stinking machine of banality approved by some fat cigar chomping greasy producer is about to be released to the general public. But this time it is different, it is going to be in 3D.

Moviegoers across the world will be able to revel in another piss-poor Hollywood production that will probably make your eyes roll up in their sockets and assume the comatose state of utter utter boredom.

“I’d rather stab my eyeballs with fountain pens than watch another cutesy, scriptless piece of shit film from America. Same old churned out crap with no redeeming features at all. All of their actors and actresses, if you can call them that, all look the same, sound the same and ‘act’ the same. Now it’s in 3D so that sh*t comes at you and you can’t get away from it. If they’re not skewing history somehow to give it an American slant, they’re churning out another franchise movie to cash in. The worst scenario is watching one of those godawful clichéd Hollywood CGI cartoons with the whiny voices emanating from all the characters pitifully trying to be funny, I’d rather spend my time listening to Nosferatu scratching a blackboard with his nails than watching any of that crap let alone in f*cking 3D,” a cinema goer from London told the Daily Squib.

The next step from the rehashed old-technology of 3D Hollywood movies will probably be microchips inserted into your cerebral cortex so that you will live inside one of these Hollywoodized awful banal productions right in your head. It is definitely the stuff of nightmares and would be any sane person’s idea of a living hell on earth. 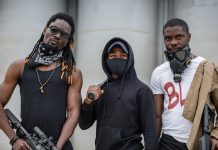