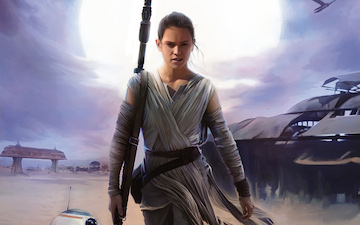 “It’s not just a black movie but the Force is stronger in the female. That’s the feminist message I was told to portray. Much like Mad Max Fury Road is the destruction of patriarchy so too is Star Wars The Force Awakens. Han Solo finally meets his end, and so this means the swash buckling 70s rogue gentleman of yesteryear is relegated to the grave, to be superseded by the delights of a female Millennium Falcon pilot/Jedi springing about the place. It gets the dollars in, Star Wars is no longer restricted to the white male but now encompasses bigger, more global revenue busting horizons,” director, J.J. Abrams told Movie Week magazine.

The Force Awakens is a relative re-make of the first Star Wars film and is moderately successful in its endeavours to entertain.

“The great thing about Awakens is that it did not have Neeson or that other guy, McDougal or whatever his name is. Plus it did not have much of an American cast, therefore dispensing in wooden plank actors with as much character as a..er.. wooden Costner plank. Thankfully, the insipid lacklustre ‘acting’ of Portman was also not present, a gift from the Force itself,” a member of the audience remarked after viewing the film.

Where the prequel trilogy 1999 – 2005 were awful affairs displaying CGI cartoon characters that looked and moved pathetically, it was a sad time for Star Wars, and truly displayed George Lucas’s loss of vision, as if he was just going through the motions for the pay cheque. Director J.J. Abrams seems to have revived some of the original spice, with less cartoony nonsense and indulged in a more emotive piece, especially with numerous insights into how things work in the Star Wars universe.