Simon Scowell, who is making another 100 million pounds from his latest ‘talent’ show ‘Britain’s Got Stabbing’, has chosen this year’s winning teenage knife crew for Britain. Also sitting on the panel is the disgraced ex-newspaper editor Piers Moron.

Over the past six weeks they have whittled down the finalists from 400,000 hopefuls and after coming this far the finalists truly deserve their accolade.

The stage is set and the raw flesh on show is truly astounding.

‘Britain’s Got Stabbing’ gets off to a spectacular start when three people are savagely stabbed in the audience. The blood trickles down the studio steps and even reaches the stage where the main stabbing display takes place.

Up first for the final night are the Bracknell crew who are a very talented bunch of twelve year olds.

They show their prowess by completing an egg and knife race in under three minutes, the finale of their presentation culminates in taking out an old lady’s kidney with the precision of a trained surgeon whilst calling her a ‘slag’. Their tools of choice are sharpened kitchen knives borrowed from their homes. 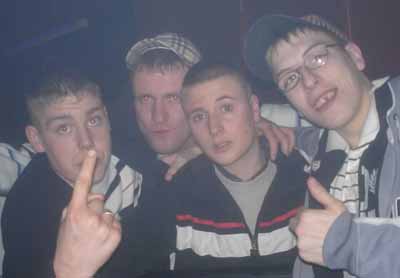 Second place goes to the Leeds crew who can drink Aldi Wine by the gallon and gut unsuspecting pedestrians by the bus load.

They manage to drink 25 cartons of cheap wine each and still are able to stab with precision. One of the crew, Lee Feral, 14, plunges a 7 inch blade into a camera man’s back and removes his liver. The Leeds crew then throw the still spitting liver into the jubilant audience as Simon and Piers applaud fiercely.

Their wondrous presentation ends with the camera man’s bloodied twitching torso projectile vomiting over the audience as he slumps to the floor dead as a dodo.

The audience laps it all up and cheers them off stage to rapturous applause. 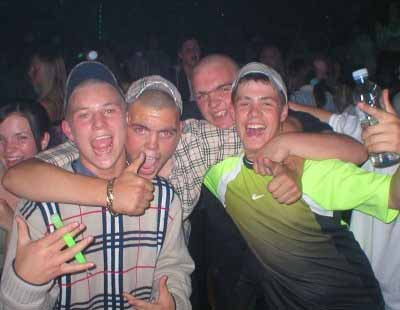 The Leeds crew and Aldi wine list second place
Finally we come to the first prize winner and Scowell with his fellow judges applaud furiously at the spectacle.

It’s the Enfield Massive, and they know their stuff. They show off their sparkling new Argos kitchen knives, which of course are made in China and are as blunt as a rusty old bread knife.

The bluntness of the blades are demonstrated on one of the shows researchers when he is set upon by the whole Enfield crew and slowly gutted in 8 minutes 34 seconds. His entrails are then thrown on the floor where the Blue Peter dog from the adjoining studio laps them up hungrily. 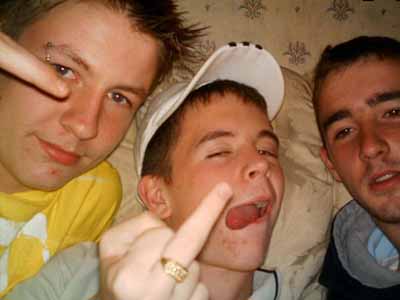 Enfield Massive and the winners of ‘Britain’s Got Stabbing’

Simon Scowell applauds furiously at the sight because not only have the Enfield Massive carved the poor researcher up but he is still alive – such is the precise knife-work of the crew even with a blunt instrument.

Kevin, 13 and Lee, 15, spot another opportunity to show off their superior carving equipment by embedding the knives deep in Piers Moron’s back. This wonderful act brings the house down in frenzied applause replete with standing ovations and severed limbs being thrown in celebration onto the stage as a show of approval.

This genius denouement is applauded by all and Simon Scowell gives it a full thumbs up. Piers Moron is also applauding wildly and still attempts to flash his smarmy fake smile despite having six large kitchen knives embedded deep in his back, the blood gushing out of him arcs up like a curious fountain of claret and sprays members of the audience much to their delight.

The Enfield crew win the £100,000 and have now been granted the additional accolade of
performing in front of the Queen at Buckingham Palace.

Britain sure has a lot of talented stabbing teens this year and The Daily Squib is very proud to be part of this great nation’s talent pool – of blood.