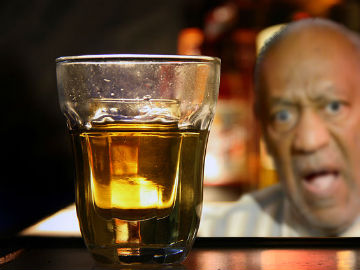 As to date, over 38 women have revealed how they were drugged and consequently raped by Bill Cosby, but now a woman has come forward claiming she drugged Cosby.

“He thought I didn’t see him put the pill in my drink, and when he went to the toilet I switched it. In five minutes he was sleepy, then he went out like a light. That’s when I called Bubba, just got out of prison and at 400 lbs was packin’. He was as gay as a Mazda Miata in South Beach. Bill called me up next morning and asked me what happened. He said he had pains all over and he couldn’t walk no more.”

Currently, former actor, Bill Cosby is embroiled in a very public show of incrimination by numerous women that claim he drugged and raped them.

The vast numbers of drugged women could be even higher, but because of Cosby’s celebrity status in America, nothing is being done about it.