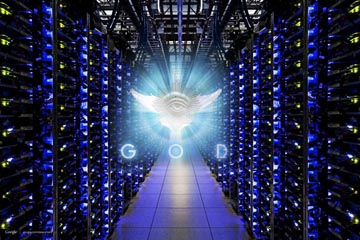 “In the past, the majority of the population were forced into a ‘reality’ of an all seeing God always watching over their every deed. We have replaced that and are your new God,” an unnamed NSA Reverend revealed from God’s head quarters.

Humans are used to Gods, all seeing, yet invisible, and the NSA has taken up the mantle very well in recent years superseding the church in its authority.

According to the religious books of old, written by the NSA’s predecessors, God is all powerful and vengeful, that’s why the NSA can order up two dozen of God’s officers to kick down your door at any moment, all because you may have had a brain fart on the Internet.

The future is coming whether you like it or not, and as technology moves inside the body and brain, your every thought and memory will be stored and analysed.

“The Internet of all things will mean God will be listening at all times. This time he won’t be an imaginary concept created by old elitests from a past era, but the NSA. God will keep you safe as long as your thoughts or actions do not stray from the path. You will love God, because your every strand of thought will be monitored 24 hours a day. You will obey God, as you will know the consequences for not doing so,” one of the priests of God added.