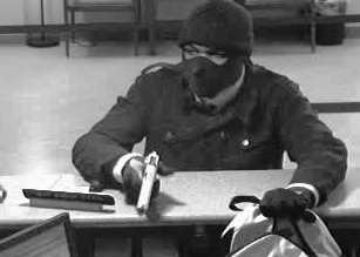 Herman Liepzig and his crew of four bank robbers were left fuming on Monday morning when they raided the Hamburg branch of Deutsche Bank.

“It was going to be a regular heist. First thing Monday morning. We crashed into the bank and told the cashier to open the vault. There was little or no resistance as the lady just handed over the key and told us to go for it. This bank we know has millions, so we opened the vault, and we only found a few euros. I felt so angry as we had been staking this joint out for weeks. All in all we got away with six euros and forty three cents,” a tearful Leipzig told German news channel ZDF.

The disappointed robbers were so shocked at the empty bank that they even lent the cashier twenty euros so she could get some food, as she had not had her wages paid for weeks.

“We lent her some money, she was hungry and on the verge of starvation. I can’t believe they treat their employees so badly,” another bank robber revealed.

The clueless bank robbers vow to prepare their next heist with more intricate planning and this may entail reading the news.

“We didn’t read the news, we just concentrated on the technical details. All we had to do was read the news about Deutsche Bank and we would not have hit it. I’m sure my local launderette has more money than that bank. Absolute disgrace,” Liepzig added from his hideout.

The Hamburg police have said they will not be pursuing the robbers but the CCTV footage was received with great laughter at the station.

Hans Gruber, Chief of Police said: “When they opened the vault and saw nothing there, it was something out of a comedy show. We Germans do not have a sense of humour but we laughed our fucking faces off at that one. It was like the Keystone robbers, they were running around like headless chickens opening empty boxes.”