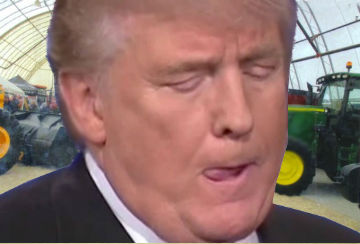 The already controversial Donald Trump may have this time stepped too far even for most Americans.

In addition to talking about blatant abuse towards women, the Trumpster was this time caught talking dirty to a sheep at a Wyoming farm show during an impromptu election campaign stop.

The shocked farmer is still receiving counselling after the brief altercation.

“He came over and he saw Dolly. She’s my pride and joy. That’s when it got nasty.”

According to the former Republican voting farmer, presidential candidate Donald Trump could not keep his little fat hands off Dolly.

“His [Trump’s] eyes literally popped out of his head. He was in love. He said he wanted to take Dolly behind the presentation display board so he could slip his **** inside Dolly. She was so fluffy he kept drooling, he wanted to grab her by the ears. That’s when I grabbed Dolly and ran for what seemed like ages before I got her to safety.”

The farm show was immediately halted by organisers after the harrowing incident and Trump with his entourage escorted back to their tour buses.

American animal rights group PETA, and several celebrities are outraged at the mistreatment of Dolly and are calling for Trump’s arrest for animal cruelty.

Many animal lovers within the Republican party are now disavowing Trump, in addition to millions of women.

Upon hearing the news, Melania Trump, a former sex worker from Eastern Europe, said she was ‘shocked’ but accepted Trump’s behaviour because he ‘pays the bills’.