Commenting on the Treasury’s analysis of the immediate economic impact of leaving the EU, former Chancellor of the Exchequer Lord Lawson of Blaby said:

“The Treasury has enough trouble with forecasts even when they are trying to get them right.

“This time they have simply assumed a disaster in order to scare the pants off the British people.

“Steve Hilton’s honest assessment of the damage done to us by EU membership is a better guide than the Government’s unprincipled scaremongering.”

Former Chancellor of the Exchequer Lord Lamont of Lerwick added:

“A lot of the Government’s so-called forecast depends on business confidence, which the Government is doing its best to undermine. Economists are no better than anyone else in predicting shifts in confidence.

“As regards the supposed cost to each household, as the Financial Times – the house journal of the pro-Europeans, has said – far from this being even an educated guess, “more likely, the numbers are just made up”.

“The Single Market is not some secret garden to which members have some hidden key. Statistics show conclusively that many non-EU members export just as successfully to the EU as EU members do.

“We have nothing to fear but fear itself – which the Government is doing its best to stir up.” 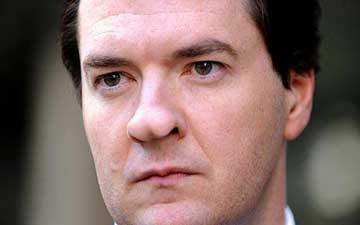 Chancellor of the Exchequer George Osborne

Today’s published Treasury command paper on ‘the immediate economic impact of leaving the EU’ is a misleading document full of erroneous projections not based on fact.

“A decision to leave the EU is not without risk. But I believe it is the ideal and idealistic choice for our times: taking back power from arrogant, unaccountable, hubristic elites and putting it where it belongs – in people’s hands.”

The Treasury’s ‘shock scenario’ is that the economy will remain the same size as it was on 31 December 2015.

Under the ‘shock scenario‘, there are four quarters of negative economic growth of 0.1% between the third quarter of 2016 and the second quarter of 2017, amounting to a reduction of GDP of 0.4%.

In the first quarter of 2015, the economy grew by 0.4%. This means that, even under the Treasury’s unreliable central forecast, just one quarter’s economic growth would be removed.

The reviewer of this report, Sir Charles Bean has said models of economic shocks are based on ‘gross simplifications’. His economic judgement cannot be trusted.

He argued scrapping the pound would be an insignificant step. In 1992, Sir Charles said ‘the costs of monetary union may be rather small’ and that the debate over the single currency was ‘a storm in a teacup’.

Sir Charles has argued for lower pay for British workers, stating: ‘the cost of employing workers has been rising too fast’ and that ‘it is important for us that we continue to see subdued pay growth’.

He has admitted figures such as these can be ‘badly wrong‘ and ‘gross simplifications’. In 2005, Sir Charles admitted there is an ‘inherent difficulty in measuring the large and complex phenomenon that is the economy, comprising millions of households and businesses, both accurately and in a timely fashion’ even after the event in question had occurred. He has admitted that ‘one needs to be acutely aware that judgement may be badly wrong’. He has admitted models of shocks ‘will inevitably remain as gross simplifications’.

The Treasury document is predicated on predictions of uncertainty and short-term effects that even the Head of the IN campaign has admitted are false.

The Treasury claims that the economy would be hit by ‘immediate and ongoing uncertainty about what the UK’s new relationships would mean in practice and how that would affect businesses and households’.

Contradicting the Treasury, the Chairman of the Britain Stronger in Europe campaign, Lord Rose of Monewden, has admitted there are no short-term risks, stating: ‘Nothing is going to happen if we come out of Europe in the first five years… There will be absolutely no change… It’s not going to be a step change or somebody’s going to turn the lights out and we’re all suddenly going to find that we can’t go to France, it’s going to be a gentle process‘.

The Treasury claims that ‘ real average wages would be around 2.8% lower after two years than under a vote to remain’.

Lord Rose has admitted that: ‘the price of labour will go up’ in the event of a vote to leave.

The Treasury failed to predict the last recession and championed the fact its erroneous assessment was supported by the Bank of England, the IMF and the OECD. It is doing the same today.

Today, the Treasury states that: ‘In the shock scenario, a vote to leave would result in a recession, a spike in inflation and a rise in unemployment… The Bank of England and International Monetary Fund (IMF) have both reported the possibility of such a recession following a vote to leave’.

The Treasury has used international bodies and the Bank to support its false predictions about recessions (or their absence) before.

In March 2008, the Chancellor of the Exchequer, Alistair Darling, predicted there would be no recession, stating: ‘This year my forecast is that—as growth in the world economy slows further—growth in the British economy will be between 1 3/4 per cent. and 2 1/4 per cent. in 2008, but faster than that in Japan, the US and the euro area. I expect growth to shift towards companies and exports, with growth rising to 2 1/4 to 2 3/4 per cent. in 2009 and 2 1/2 to 3 per cent. by 2010. My forecast shows that the UK economy will continue to grow throughout this period of global uncertainty—a view supported by the Bank of England, the International Monetary Fund and the Organisation for Economic Co-operation and Development’.

In fact, the UK economy entered recession in the third quarter of 2008, experiencing six successive quarters of economic contraction.

The Government today accepts many of its previous statements about the referendum’s economic impact were wrong. This undermines the credibility of its economic judgement now.

The Treasury states today that: ‘The evidence for the negative economic effects described … is already clear in advance of the referendum’.

This contradicts many of the Prime Minister and Chancellor’s past claims. The Prime Minister has said that the referendum has not caused uncertainty. In November 2014, the Prime Minister told the CBI conference that: ‘The worst thing for us to do as a country is to pretend this European debate isn’t happening … If there has been uncertainty, why is it that this has been such an extraordinary period of investment into this country?‘. In 2013, he said opponents of the referendum’s ‘whole argument about there being uncertainty is fatally undermined‘ and that a vote on the EU ‘is right for business, it is right for our economy’.

Mr Osborne himself has previously dismissed allegations that the referendum would create uncertainty, stating: ‘I don’t agree with him on this and I don’t think it’s any secret that Liberal Democrats and the Labour Party don’t think the people should be asked about our future in Europe, whereas the Conservative Party does. I think the business community understands what we are doing’.

The Government has previously accepted Treasury estimates are fixed to suit its political priorities, as this report has been.

The Government has previously said that the public shouldn’t trust Treasury reports, owing to their bias.

The Chancellor of the Exchequer, George Osborne, has said: ‘the public and the markets have completely lost confidence in government economic forecasts… Unsurprisingly, these forecasting errors have almost always been in the wrong direction… The final decision on the forecast has always been made by the Chancellor, not independent officials.And that is precisely the problem… Again and again, the temptation to fiddle the figures, to nudge up a growth forecast here or reduce a borrowing number there to make the numbers add up has proved too great… I am the first Chancellor to remove the temptation to fiddle the figures by giving up control over the economic and fiscal forecast. I recognise that this will create a rod for my back down the line, and for the backs of future chancellors. That is the whole point. We need to fix the budget to fit the figures, not fix the figures to fit the budget. To do this, I am today establishing a new independent Office for Budget Responsibility’.

The Chancellor of the Exchequer, George Osborne has said: ‘The power that the Chancellor has enjoyed for centuries to determine the growth and fiscal forecasts now resides with an independent body immune to the temptations of the political cycle’.

When the Office for Budget Responsibility was established, Justine Greening, now Secretary of State for International Development, said: ‘Within a week of taking office, we had set up a new independent body to return credibility to official forecasts. Until then, the final decision on official Government forecasts had always been made by the Chancellor and his advisers-one of whom is now shadow Chancellor-rather than by independent experts. Over the past 10 years, the last Government’s forecasts for growth in the economy have been out by an average of £13 billion, and their forecasts of the budget deficit three years ahead have been out by an average of £40 billion. Unsurprisingly, those forecasting errors have almost always been in the wrong direction… We needed to make sure that we have official forecasts for the economy that the public can trust, even if that means we end up giving away some of our powers as Treasury Ministers. As my right hon. Friend the Chancellor has said, we need to fix the Budget to fit the figures, not fix the figures to fit the Budget’.

Despite these admissions, the Government has never asked the OBR to assess the economic implications of the leaving the EU.

The Treasury document makes a number of assertions that are either contestable or false.

The report claims ‘On leaving the EU, in addition to losing its current access to the EU Single Market, the UK would no longer benefit from the EU’s free trade agreements with the rest of the world’.

Contradicting this, the Director of the IN campaign, Will Straw has accepted that free trade agreements with third countries could continue, stating: ‘either eventuality could come to pass’.

The report claims that: ‘No existing alternative to EU membership, apart from EEA membership, preserves access to the passport’.

The Government has previously admitted this is misleading, stating: ‘In some areas the EU has “equivalence regimes” to allow financial services firms outside the EU to trade with the Single Market in a way that is similar to the EU financial services passport’.

The report claims that: ‘There would be major uncertainty about the future levels of agricultural subsidies and whether they would be maintained at their current levels once the UK left the EU’.

Contradicting this, David Cameron has guaranteed that British farmers would continue to be supported, stating that: ‘As long as I am Prime Minister, I would make sure that an agricultural support system would be properly maintained’.