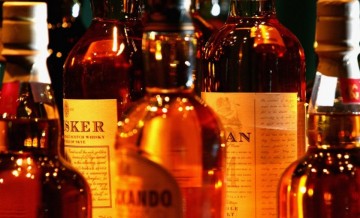 Everyone loves a drink, including the DS staff, and it is to this end that we and many Britons are bemused by the Remain campaigners who are constantly putting Britain down.

The EU has made booze for Britons more expensive and not only that, restricted how our beverages companies can trade globally.

We should be selling our whisky to the world, instead the EU restricts British drinks companies from striking free trade deals with vitally important, lucrative markets.

If we Vote Leave and take back control then our drinks trade will prosper – something both drinkers and exporters can raise a glass to, and buying a round won’t mean you need to take out a second mortgage or sell the car.

We import more beverages from the EU than we sell to them. They will want to strike a free trade agreement.

The European Court has previously required the UK to increase the price of beer, putting jobs at risk.

Being in the EU means we cannot strike a trade deals with India, harming exports of alcohol.

The EU has been very bad at negotiating free trade deals compared to small countries.

The Head of the IN campaign has admitted trade deals with third countries could continue. There is no reason why any country would choose to deny itself access to the world’s fifth largest market.

It is possible to negotiate a trade agreement (FTA) very quickly outside the EU, certainly in less than two years.