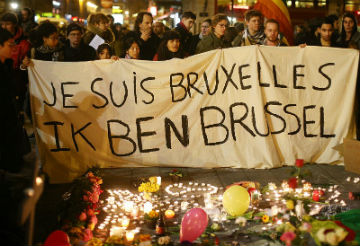 Closing the Schengen area does not mean closing borders, all it means is that there are border checks so that the free movement of terrorists and weapons from Syria may be halted. It makes common sense.

There need not be some kind of ridiculous Americanized Trump reaction like banning whole swathes of people or closing borders, but border checks is a reasonable request.

The hard truth is that the deaths of the innocent people are on the heads of the weak lilly-livered socialist policy makers of the EU and their communistic ideals of fast mass migration. The blood of innocent commuters spilled on Tuesday drips on the EU leaders who stood by after Paris and did nothing, a shameful disgrace to the people of Europe.

In the UK, the ugly bleating face of Tony Blair rears its hypocritical head every time an atrocity graces the continent. Here is a man who had no qualms about destroying and destabilising vast areas of the Middle East thus creating a power vacuum for ISIS’s creation.

We must address the failure of leadership for your disgraceful policies of apathy and laziness are a direct cause of the events that now occur on a regular basis.