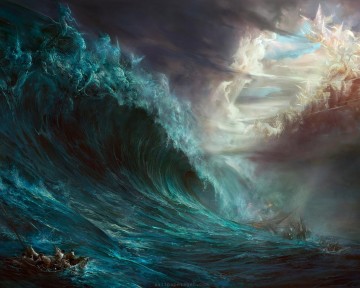 “If you’re a surfer, you line up, tap into that deep water swell, set the pace and when you see that special A-frame you know you have to enter into the backdoor sweetly, gently, along the face and ride that mother carving along the roots of that barrel until you’re through. The same principle applies to economics, to go against the flow is to invite worse misfortune, especially when there’s a tsunami of debt coming over the crest.  Economic depression is good. When waves hit, they create destruction, but that same destructive energy is re-energised to produce even more waves. Destruction is good because it produces change and for this process you must be prepared to watch the others who are unprepared to fall, to be caught inside and crash under the surf, rolled around like a tumble dryer then unceremoniously spat out or drowned.

“The economy is like an ocean, it’s as deep as it is shallow, an unpredictable mass of energy fuelled by fear and greed, a chaos pit that moves in waves, with currents that can drag millions of fish into the belly of the beast in one fell swoop.

“The derivatives, the debts, the lies, the bonuses, the soothsayers, the chancellors, all think they have a firm hold of the rudder, and yet their ship can be crushed in a second without thought, without remorse, compassion or any form of emotion.

“You may think the quants all clunking away buy, sell, buy, sell, milliseconds, have an edge but when market moves are precipices, swells, 200 foot barrels, they will be caught out with even more vigour as the banks go silent, liquidity is a dry ocean floor filled with foam where the starfish and crabs are exposed to the air as the next wave comes down hard shattering all in its path.

“We must welcome the economic depression and embrace its sheer magnitude, its powerful equalising light, the all seeing eye of truth that melts all falsities and lies in its path. Drink wine now friends, for tomorrow you shall be drinking water from a puddle of mud, and you shall quench your thirst on it with the same relish from which you drank the Domaine de la Romanee Conti Romanée Conti 1967. You are alive.”