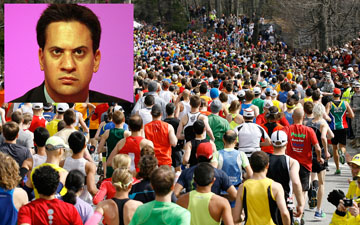 “It’s bad enough as it is, but with Ed Miliband in charge, prepare for an exodus of pretty much all taxpayers. All will be left are those on the dole, illegal immigrants and benefits families. Who’s going to pay the vast punishing Labour taxes then?” a professional businessman told the Financial Times.

Labour’s plan to take away earnings from hard working Britons will mean that there will be an exodus of many professionals to friendlier shores, away from the horrid thought that pretty much every penny earned is taken away to pay for the feckless.

But where to go?

Anywhere out of the eurozone is a safe bet, because Ed Miliband and his evil socialist henchmen and women are also seeking to incorporate the crumbling euro currency and destroy Britain from the inside out.

Hopefully by the time Miliband is in power, the democrats (American socialists) will have been ousted from America, although a long shot with the level of brainwashing of American voters.

Africa is out of the question obviously as it is prone to deadly viruses and war.

The Middle East is out of bounds because it is entrenched in war.

Russia is out of bounds because it is in a state of war.

The Far East could be okay, however avoid China like the plague.

South America is a possibility but beware that security is an issue and you will be in danger of kidnap, arrest, thievery or general death.

If you are rich enough, you may try Switzerland or Monaco otherwise forget about it.

If anyone has any ideas please leave a comment about where to go in the world that is safe.