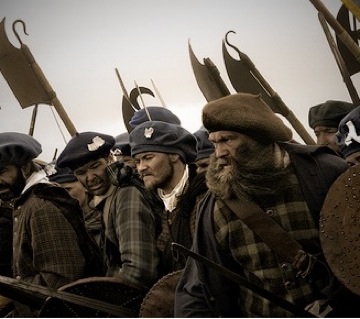 England currently owns Scotland, it’s like an outpost, a place where the locals are placated with benefits and treats now and again, but the oil reserves are dwindling, and patience is thinning on both sides of the border.

There is no price on freedom, it is profoundly better to be wild, free and forge your own path than a slave to someone else’s economic and political system.

The degradation of the Scots is felt every day when they kowtow to their neighbours over pocket money.

“There you go, there’s your pocket money for the month you wretched Scotch bastard, now if you lower your head further we might give you an extra penny. Run along now to your dingy boozer where you can anaesthetise your cowardice, shame and remorse.”

Ah, let us have a TV debate with a failed traitorous Chancellor whose policies of economic destruction Britain is still recovering from.

Over history, Scotland has changed immeasurably, now it seems the populations are tamed, brainwashed into subservience, slaves to finance from other nations — a defeated people.

Just as England is controlled by Brussels, so too is Scotland by England in an increasingly globalised world to be controlled and dictated to by other nations or technocratic entities is a sign of defeat, of weakness. As the sordid Scots try to summon up an ounce of what they used to have, aye, give me a drop of fucking dignity, something the ancestors had in bucket loads, there is a faltering sigh of defeat from the once proud, wild Celts.

If you’re a Scot you have two choices, paint your face blue, wear your kilt and pick up your broadsword before running into battle and cleaving some unfortunate in half with one swipe, or there’s the alternative, stay at home, receive your benefits, have a drink and forget about it.