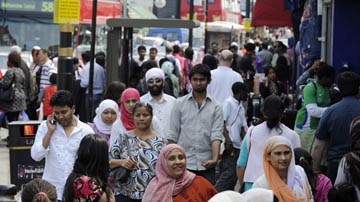 Anyone who claims that Britain’s core is not racially concentrated is deluded says a new think tank paper.

“Quite simply put, there is a very good reason why there has never been a person of dark skin tone as Prime Minister of Britain, because the core institutions within this nation follow a rigid racial lineage. The same applies to British entertainment, advertising and commerce.

“The emergence of political parties like Ukip simply mirror what the core English population believes. The socialist left may pretend to not be racial however, one only has to look at their former leaders and you will not see a dark face in sight. The Conservatives, may have a few tokens here or there as MPs, however their roots lie not only amongst class lines but racial lines. The armed forces and Intelligence services are all geared to preserving the core racial lineage and there has never been a dark person in charge, as is the case in the police services.

“As for London, which is now a multi-racial cooking pot, possibly going into a boil, if one looks at history, one will see that London has always been a magnet for the whole world to congregate, but tensions are rising daily as the English feel disenfranchised in their own capital city and White Flight occurs. Queen Elizabeth I even had a few words to say about the influx in 1596, her majesty issued an “open letter” to the Lord Mayor of London, announcing that “there are of late divers black-moores brought into this realme, of which kinde of people there are allready here to manie,” and ordering that they be deported from the country. One week later, she reiterated her “good pleasure to have those kinde of people sent out of the lande” Finally, in 1601, she complained again about the “great numbers of Negars and Blackamoors which (as she is informed) are crept into this realm,” defamed them as “infidels, having no understanding of Christ or his Gospel,” and, one last time, authorized their deportation. It is true to say therefore that London has always been a contentious part of the country for the English.

“The influx of white Eastern Europeans into the country will be congratulated by many Britons in the future, as not only are most of them white, but they are Christian and deeply racist. This is a vast difference to previous influxes of former Commonwealth populations, and of course Third World nations, who are mostly viewed as untermenschen by the core English populations.

“To have someone like Sajid Javid claim that he has passed the Tebbit test is in itself ridiculous. First of all, he may presume to be integrated and tick all the boxes, but the core English population will never see him as one of them simply because of his skin colour and his name.

“The United Kingdom is ‘ruled’ by the British Royal family, whose bloodline is linked directly to the Saxe-Coburg-Gotha and House of Hanover. The point being made here is that the British royal family is Germanic and of course even though they are imports, they are still racially pure and white. Therefore, the core of Britain is racially Aryan. To have a kingdom, otherwise would be deemed as madness for the British. You cannot ever be English if you are non white, that is the core of England.”