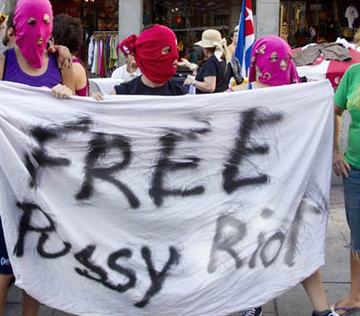 The Pussy Rioters were freed a few hours ago and have vowed to continue Pussy Rioting in the new year.

“We are ever so pleased to have been released from our prison cells. As a Pussy Rioter we on occasion even thought about indulging in a bit of Pussy Prison Riot fun but we didn’t want our sentences extended. It ain’t worth the trouble,” one of the Pussy Riot girls said.

They have returned to the capital Moscow, where they continue to Pussy Riot with vigour.

Both Nadezhda Tolokonnikova and Masha Alyokhina, immediately donned their special Pussy Riot costumes once released from their jail cells and made their way to Red Square for a Pussy Riot Party.

It was only a few years ago when the London Daily Squib office was deliciously invaded by the British Pussy Riot contingent.

Nadezhda told waiting reporters that she was still dedicated to the art of Pussy Rioting even though the prison guards tried to beat the Pussy Riot out of her during her harrowing jail time. 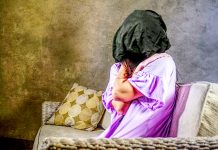