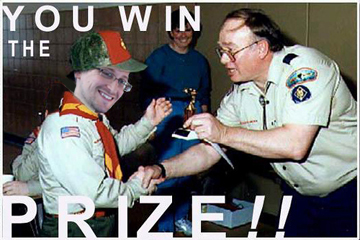 A panel of experts for an unknown agency somewhere have revealed their judgement on the errant ex-NSA operative, Edward Snowden.

“His actions may be thought of as honourable in his own mind, but that’s it. What has he achieved? Nothing. The simple fact of the matter is that he made public something that some already knew. As if anyone who gives every detail of their lives away on social networks or uses a smartphone would think for one second that they are not being monitored by worldwide agencies? These social networks were set up for that very reason and assisted by government. People are still giving all their private information away on social networks like Facebook and through all other digital avenues even after the Snowden affair, therefore nothing has changed and it won’t. The public forgets, they are too far gone and addicted to their little toys given to them to play with,” the damning report revealed.

Things would have maybe changed a little if Snowden had dared to reveal information about who really committed 911, but even then the public is so paralysed and crippled, they would accept it and simply carry on in their social network stupor.

One thing that Edward Snowden failed to realise is that there is very little that can awaken the people any more. This is why they are now in a prison virtually and in reality.