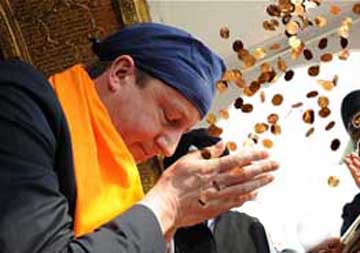 The guys with the money have told Cameron that Britain is an old and inconsequential country fit for only tourists and students.

The British Prime Minister’s response was to bow his head lower than usual and stick his hand out in a begging motion.

The UK delegation were in China all of this week trying to drum up some business for Britain from the country that owns most of America, Europe and Africa.

A Chinese official was humoured by the British PM’s grovelling: “He came into the room and we told him that we could buy his country with 0.001% of our wealth. Then this Cameron snivelling dog bowed his head whimpering like a wounded animal. He put his hands out in a begging bowl fashion and I dropped a few coins in there. I then told him to get out of the room. He walked backwards with his head still bowed all the time whimpering and saying thank you, thank you.”

Cameron did the same thing with the Indians in February.

The triumphant British team will fly back to Britain later on today after another successful trade trip.