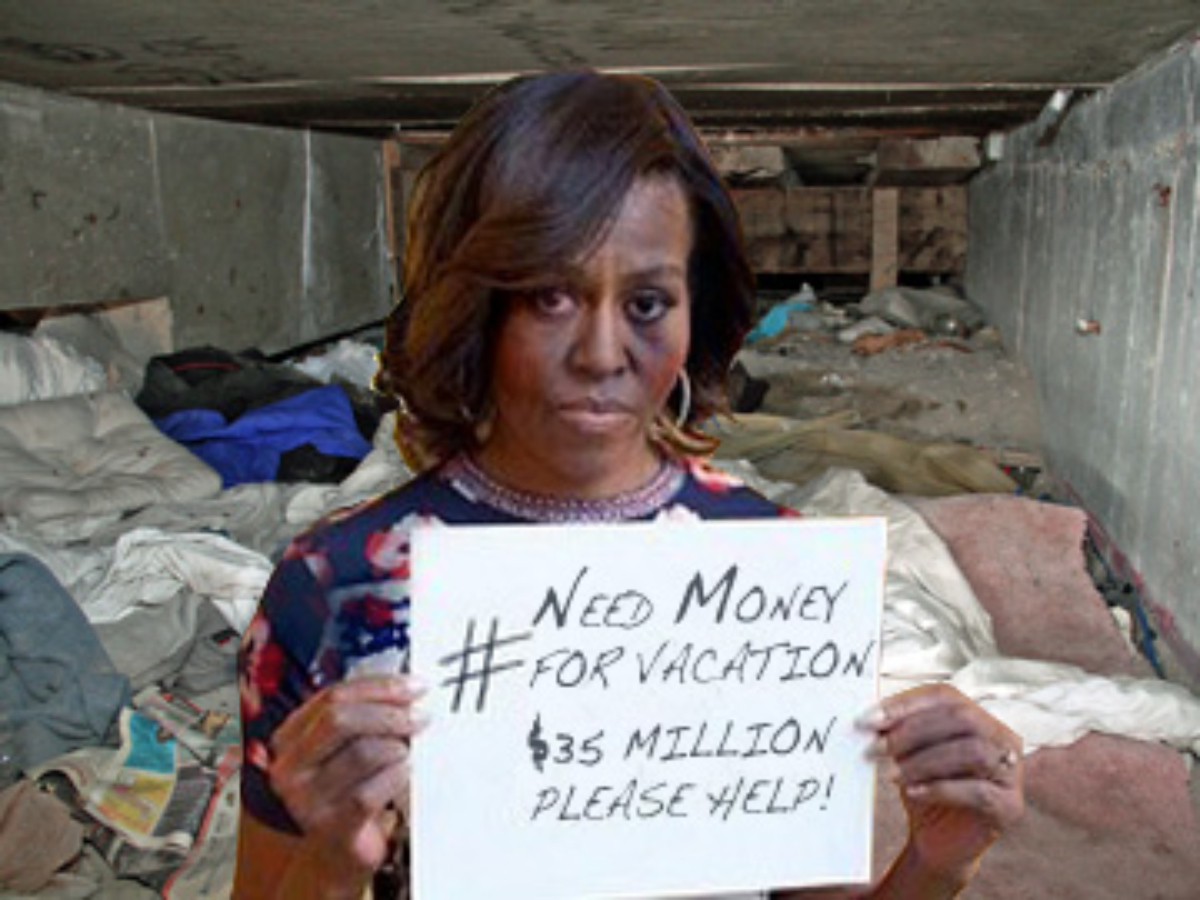 The trials and tribulations of a former first lady are probably far-reaching and complex, and it is this complexity we can see in Michelle Obama, a woman who once had it all but now is a mere footnote in history.

Gone are the $80 million vacations paid for by the predominantly white taxpayer, the thrill of taking ‘whitey’ for every penny by using Air Force One to fly to Africa and back on a whim are now a distant memory.

Michelle’s famous Spanish holiday with about 60 hangers-on cost the American taxpayer in excess of $120 million, staying in the most lavish hotels and taking up whole wings for her massive entourage.

Michelle has thus been relegated to making vomitus saccharine ‘woke’ propaganda programs for the Netflix streaming service, and listening to Barack go on and on about his amazing achievements whilst in office. There’s only so much one can listen to someone talk about gay reforms and transgender issues.

Michelle himself, is happily transgender, and has had enough of all the controversy surrounding something that for her is quite routine. She simply wants to move on from this divisive issue that has even brought pain onto socialist darlings like J.K. Rowling.

“We need to move on from these distinctions. I am a woman, even though the length and girth of my cock is three times that of Barack’s. He always teases me about that in bed, but I always show him who is boss later on. I competed in the ladies shot put contest last year in Arkansas with the Clintons on vacation. Hillary could barely pick the ball up, and dropped it on her toe crushing it like a pretzel. I on the other hand threw the steel ball so far, it took 15 minutes walk to recover the thing. Let’s say I won the prize that time, much to the chagrin of the other ladies. Sore losers much?”

What could possibly be causing this depression in Michelle, especially after she achieved so much during her tenure as first lady in the White House?

Psychologist, Megan Malarkey, revealed her theory on the depressed state of Michelle Obama: “Depression comes in many forms, and I believe Michelle is simply depressed because of the loss of power and using other people’s money. Imagine being ferried everywhere in limousines, helicopters and Air Force One and then it all suddenly stops. The huge vacations where she brought all her friends, relatives and cleaned out luxury hotels of their silver, bath towels and bibles. Those days are all gone, and Michael misses it all. It’s a sort of sentimental depression, much like remembering a really enjoyable vacation but eventually coming back to reality and your old boring life. I suggest that Michelle starts taking drugs to counteract the depression, cocaine and maybe a little meth would pick her spirits up just fine. She needs uppers, no opioids though, they’re downers.”

Whatever happens to Michelle in the future is up to her, and only her. Cheer up Michael, look forward to a positive future.