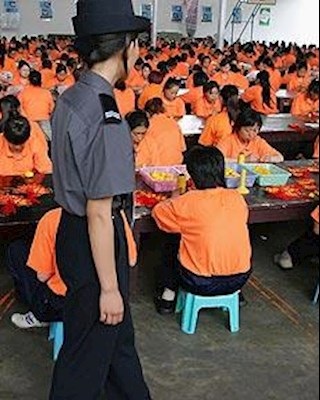 Ever wondered why everything is so cheap from China? Well, it is simple economics because the goods that are sold to the rich Western countries, are all produced by zero slave labour costs, and minimal costs of materials, which are then marked up in price once reaching the West by as much as 10,000%.

All your designer shirts, handbags, electronics, and assorted cheap plastic trinkets, that usually break or deteriorate after a few days are produced by slave labour from China, and this also includes the Christmas cards you send to all your family friends each year.

Slave labour in China also includes all ages of forced labourer including children, and elderlies.

This Christmas, as you pull those crackers and open those presents after a hearty meal, there will be no thought to where these objects came from or the slaves who made them and their hopeless plight.

“Those skilled at making the enemy move do so by creating a situation to which he must conform; they entice him with something he is certain to take, and with lures of ostensible profit they await him in strength.”
― Sun Tzu, The Art of War

For decades now, since the world’s manufacturing moved to China, there has been a vast increase in military spending by the Chinese politburo, as the money funnelled in from vast profits selling slave made goods to the West goes straight to building up China’s already huge military machine, modernising weapons, and preparing the army for something to happen in the not too distant future.

It must come with a certain form of glee, and horrific gloating, the head of the Chinese Communist Party feel as they build up their military might daily at the expense of the West, who will no doubt be the target when the time is right.

“Conform to the enemy’s tactics until a favourable opportunity offers; then come forth and engage in a battle that shall prove decisive.”
― Sun Tzu, The Art of War

As the West sleeps, lazy in its stupor, growing fat with its cheap trinkets and plentiful junk laden food, the Chinese factories work day and night to supply the Western supermarkets and businesses with cheap goods created by slave labour where 90% of profits are funnelled into the Communist war machine, waiting for the right time to strike. 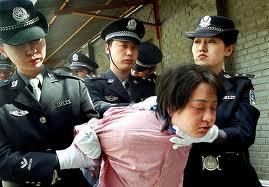 The ultimate role of Communist China is expansion, and when it does it will be an explosive moment. Already, large sectors of Africa are being mined by China for their raw materials, whilst Chinese companies build railways and roads for the appreciative African nations.

There will come a time when the pressure cooker will overflow, the steam will be too great to contain. There will also be a wish for revenge, or in the Chinese psyche a righting of a wrong, which will invariably include the conquering of Japan, for their Chinese escapades in WW2.

The entirety of South East Asia will be overrun, and once secured, Australasia will be next. Unfortunately for the Australians and New Zealanders, what chance will they have from such an immense force bearing down on them?

India and Pakistan, will be urged to opt for mutual destruction through nuclear means, and once they comply, it will be China who will move in to occupy what is left.

From that point, it will not be long before Chinese paratroopers one day sail down over the American towns and cities, and the Chinese tanks sweep across the European peninsula along with the Russians.

The ultimate irony will be that the West financed its own destruction, by giving Chinese communist slave labour factories contracts to manufacture their goods. China used the West’s greed and desire for constant massive profit, as well as the greed of the Hollywood studios who took Chinese communist money to finance their films as a path to their own ultimate destruction.

“the opportunity of defeating the enemy is provided by the enemy himself.”
― Sun Tzu, The Art of War

The Chinese will eventually leave their polluted land, and move to the beautiful lands of the capitulated Western nations.

Either you conform to the communists once they arrive or you are re-educated or killed.

This Christmas, as you sit back fat and bloated, in front of your fire with all your lovely Chinese slave made prezzies, think for one second about what you have done, and how the Chinese played on your greed for their victory.