Teenage activist Greta Thunberg has walked across the Atlantic ocean utilising zero carbon emissions apart from her breath and other bodily gases emitted.

The Swedish 16-year-old messianic climate activist travelled from Europe to the US across the ocean by walking over the ocean’s surface for another UN Climate Action Summit in New York.

Before she left Sweden two days ago, she was waved off by her many fans on the shore of Stockholm port.

Gertrude Snorunge, 18, who is an avid fan and fellow activist was present as Greta jumped onto the water and proceeded to walk to New York.

“My hero, she thanked us all, and said she will use minimal carbon emissions to cross the ocean. We then nearly fell to the ground when she simply walked over the water like Jesus Christ. It was an incredible sight to behold!”

The trip could take two to four weeks, and December is considered off-season for walking or sailing across the Atlantic – but the Swede is refusing to fly because of the carbon price of plane travel.

Ms Thunberg has become a symbol of a growing movement of young climate activists after leading weekly school strikes in Sweden that inspired similar actions in about 100 cities worldwide.

The activist has also drawn criticism from conservative commentators in the US as well as Russian President Vladimir Putin. But she brushed it off during her round of back-to-back interviews in the catamaran on Tuesday.

“It should be the adults who take that responsibility,” she said. “But it feels like the adults and the people in power today are not.”

Walking on water is not an easy task for many, but Greta Thunberg makes it look very easy, even though she is defying the laws of known physics.

“If Jesus could do it, so can I, besides, I’m bigger than Jesus now. My narcissism and ego is so big, it could reach the stars and then some.” 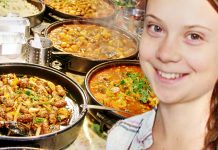 No Curry For Greta Thunberg 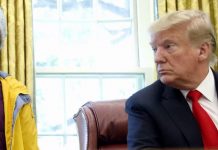 The Revenge of Greta Thunberg