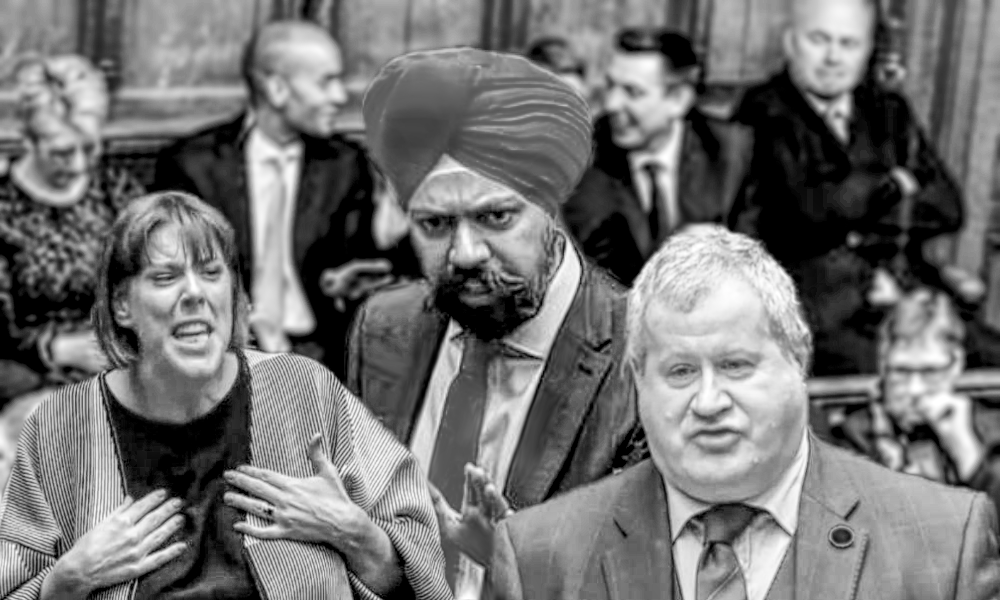 Bringing out an angry Sikh to berate the prime minister was a sure-fire pot of gold during his first PMQs, as the assorted socialist animals groaned and shouted, this was a sign that any form of dignity had long departed the British parliament.

The House of Commons opposition benches are now filled with wild-eyed zombie Trotskyite remainers who are doing everything they can to thwart the will of the people. It is possibly a power thing, these foul creatures are low-born bastardized, inbred twelve toed oiks who have no real education, and no honour when it comes to respecting the British voter, despite voters voting in these disgusting turds in the first place, but now they’ve taken over from the government, they are BIG.

One SNP brute wearing a tartan shirt stands up and starts spouting unintelligible Scottish gibberish spitting foul globules of whisky in every direction. Then a grotesque nostril flared fish-wife Jess Philips hysterical Labour MP stands up, red-faced, shaking violently, before she berates the PM with her ad hominem unjustified attacks and her unintelligible useless waffle. After a moment, a Bangladeshi charwoman stands up, says something completely unintelligible then sits down again. Half of the benches opposite the government can’t even speak proper English let alone operate as MPs — what the fuck is going on?

The fat pie-eating Scottish turd, Ian Blackford, jumps to his feet, his overstretched deep fried mars bar belly flopping forward with gusto as he salivates animatedly with his signature paedophile stare. If there ever was a snivelling English-hating-cunt, the dishonourable Philistine Blackford is one. He exclaims in his unjustified arrogant manner how he wants to dishonour the vote of the EU referendum denying the people their democracy, immediately afterwards demanding that he wants another Scottish referendum, and that result should no doubt be honoured.

These aberrant corrupt creatures, slithering hypocritical cunts and burping fuckwit barnacles fouling the benches are vile dishevelled monsters, the lowest form of human detritus that should be flushed down the sewer of inequity, to be solidly dumped from the straining puckered anus of Karl Marx’s dead corpse into the burning fires of hell where they all fucking belong.

Meanwhile, from the government benches — silence..