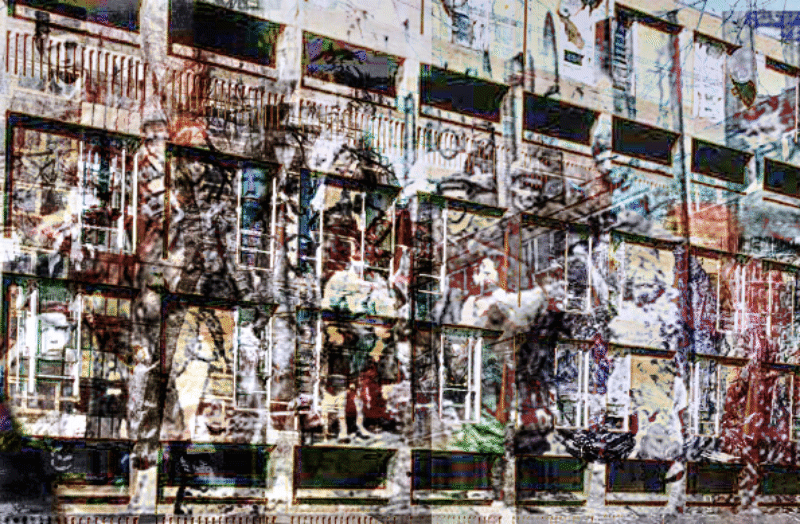 Let us celebrate the end of austerity. Standing amongst the grey miserable tower blocks, the smell of raw sewage and rotting garbage permeates the smog filled polluted air. This is Britain, and austerity has just ended officially.

The High Roads now full of fried chicken shops, Polski Skleps, gambling dens and boarded up businesses covered in posters for the local DJ’s latest rave, only £5 to get in.

Up above the high rises, the sky may be blue but it is replete with white lines criss crossing the air, these mysterious lines appearing from planes working day and night churning out chemicals that drop slowly onto the ground, to be ingested by the unknowing unawake population.

The filthy pot holed roads, now a car park where the increase in traffic has been so immense from the EU, vehicles barely move over 15 MPH, people resigned to sitting in their cars twiddling their thumbs just stare out of their cars into nothingness. Driving in London is now such a nightmare, that it is preferable to simply crash your vehicle into a lamp post and walk.

More cash has been allocated for the NHS we hear. That’s not what we find in the local GP’s office where queues of sick people snake out into the road, many too ill to stand just lie on the cold pavement and close their eyes in painful resignation to their fate. It can now take months to get a single appointment at your surgery. The immense influx of migrants over the years has effectively destroyed the NHS’ ability to function. God forbid you need hospital help, well you’re shit out of luck, there are no beds left. If you live in London, the daily stab victims coming through the doors are in a constant loop, blood and pieces of flesh dripping all over the tiles, and as you sit for your next appointment in eight hours time, you will no doubt see more stabbings and shootings directly in front of you, like some sort of theatrical display of death and mayhem played out in grotesque realism.

The hospitals, replete with blood stained walls and mattresses, are now places where you go in and never come out again. They call it mercy, because living on a tiny island so overcrowded is like living in a nightmare that you can’t wake up from. If you manage to get an ambulance lottery ride to a hospital, the distraught overworked staff stick you in a corridor on a stretcher amongst the other cadavers. Your wait can last weeks or months, and sometimes surgery is conducted in the corridor if the doctors ever find your name tag. Many come here to die then are unceremoniously dumped in an oven and your ashes blasted over the city, an infernal snowing cloud of human misery.

The rule for living in modern day Britain still suffering from mass migration is don’t ever get sick. Do everything you can to never fall ill, or you will put your life in serious danger. Just as Angela Merkel will be remembered as the woman who ruined Germany’s social service system, her counterpart, Tony Blair, will be known for war crimes, unfettered migration and the ruination of schools, hospitals and benefits, both of these monsters are socialists who have contributed to the destruction of their own nations from within.

When Gordon Brown, the Labour Chancellor, and later unelected PM, sold off Britain’s gold reserves at the bottom of the market, he knew very well what he was doing, and did it with a grim Scottish smile.

Let us thus celebrate the end of austerity, maybe on the way to a food bank to get a few rotting turnips to mash into a soup that will sustain you and your family of five until your next meal in a week.

The grey miserable cities and streets of Britain, where the homeless are now part of the furniture, and the daily tax slaves begin their day of work so they can take home a few pennies after being taxed to the hilt, perpetually rising council tax, electricity bill, water bill, gas bill, internet bill, telephone bill, insurance bill, slashing the wrist and seeing the jet of blood spurt across the carpets and walls are a thankful reprieve to a life of utter meaningless tax slave misery. You are a tax zombie, condemned to a life of commuting for hours every day then death. Your meaningless life only compounded by episodes of Come Dancing or Big brother on the BBC taxed television you own in your leaking freezing grey home.

It’s another day at work, the buses and trains are now full to the brim, the roads are the usual car parks, the hospitals, something from the Crimean war, the schools, overloaded where the English language is now a foreign sounding mush of lost syllables. You work the whole day and come home, then go out the next day to work in the same meaningless poorly paid job that destroys every single part of your fucking soul. Stagnant wages, brought down by the millions who took the jobs the Brits were deemed too lazy to do, your EU migrant boss is not happy with you, so he fires you. You breathe a sigh of relief. Maybe it is time to queue for days at the GP’s office and beg to be put on the waiting list for a mobile buggy, to drive you everywhere because you are too lazy to walk anymore.

It’s okay though. Wake up. Haw Haw Hammond has been told to end austerity. Everything is ok now, Britain has been saved. Hurrah! Just pop more pills, and jam another needle into your ankle, when the mist rises and the comforting opioid blanket covers you in your grey freezing rat infested home, these are the only words that will go through your frazzled mind…austerity..over…austerity…over…auster…