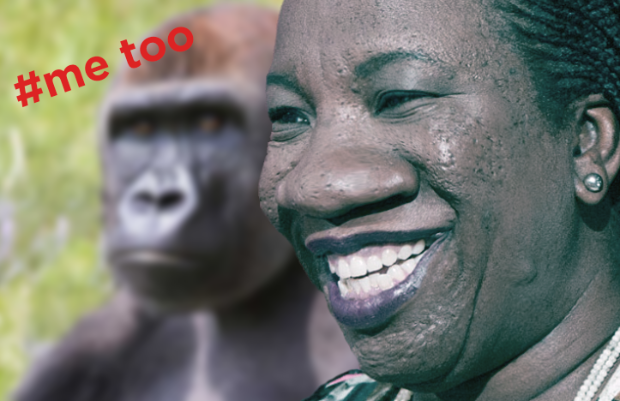 Arriving in the lush green hills of Uganda in deepest Africa, Tarana Burke, the #metoo founder funded by George Soros has come on a fact finding anthropological/biological study on the relationships wild animals have with each other.

“I want to find out what the biological instinct of the male is in wild animals. I am eager to first study the mountain gorillas in the forests of Bwindi Impenetrable National Park and Volcanoes National Park,” #metoo creator, Burke told the National Geographic.

Deep in the jungle, the expensive trip is set to cost over $32 million, and is of course further funded by the Soros Open Society fund, as well as other agencies that fund the #metoo movement.

Gorillas in the mist

“The male gorilla is usually dominant in the troop. Dominant male gorillas are called silverbacks and are more aggressive than other group members since the troop’s safety is their responsibility. The silverback makes all group decisions, is responsible for most of the group calls, receives the dominant portion of food (even when resources are limited) and can terminate troublesome behaviour with just a vicious look. A male must have an established home range and great strength to confront any rival before acquiring his own troop. Therefore most silverbacks are usually solitary for about 4 years and turn 15 before acquiring a troop of their own,” Burke revealed in her study.

Unfortunately, the plight of the gorillas is in constant flux due to the threat of poachers, however thanks to great care in the sanctuaries of the national parks they are relatively safe.

Pride of the lion

“When male lions begin to reach sexual maturity around age two, the older males within the pride kick them out. The female lions, which are usually all related to some degree, typically stay behind.

“Life is very hard for the male lions. For a young male, the betrayal by his own blood must be confusing to him, but this is an ancient rite — the casting out of young males into a world of unknowns — a world where he will be able make it, or die.

“After being kicked out, the young males roam the countryside solo or in small bands, often with their brothers or cousins, negotiating the no-cat’s-land between territories of other lions. If they stray into these territories, they are likely to be attacked or killed. A majority of male lions die during this time.

“Lions are also prized by human hunters and poachers so that is an additional factor to the survival of the male lions.

“If they survive long enough to find a promising new area, the next step is to take over another pride. But of course resident males will have none of that, and so they end up fighting, often to the death.

“When male lions take over a new territory, they almost always kill the prides’ cubs, since they are not biologically related and do not want to spend energy ensuring that other lions’ genes will be passed on. Lions cannot be stepfathers, also female lions will not be receptive to mating while they are nursing, so killing the cubs enables the male lions to procreate.”

Burke’s study of natural wildlife animal behaviours and instincts has somewhat changed her view of the anti-male #metoo fiasco which she heads.

“I realised that there is a biological reason for most behaviour. Although humans are top of the animal chain and generally not tied to brute instinct, we still have these urges, which we control for most of the time. It is natural for the male of the species to generally be on top of the female in most cases. The female is submissive in most animal groups and this should include the female human. We are not equal, we are human, they are animals, but male and female are not equal and will never be. This is the biological way and the male of the species is always going to have different characteristics than the female. We must accept these differences as it is ingrained in biology.”