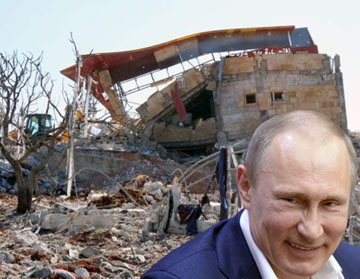 Back in August 2013, the Daily Squib wrote an article warning of the West’s encroachment into Russian controlled Syria.

What pundits on mainstream media are writing about today, we already figured out in 2013, and we firmly stand by our analysis of the situation now as much as then.

The West must be weary of the bear backed into a corner, as crossing the red line of Syria is a one way street with no return.

Today, we have Donald Trump as president of the United States, who has so far acted cautiously regarding any intrusion into Syria, even after the recent gassing by whoever did it.

This is the question we must always ask, who did the deed? In a world where governments happily hurt and murder their own citizens for their own political and geopolitical gains, nothing can be counted out. There is now no trust in any global government as their nefarious techniques have too often been revealed.

The news coming from Syria cannot be trusted as the mainstream media is heavily tied to governmental rules and military intelligence propaganda. Unless there are news agencies working independently on the ground free of reporting restrictions, we will never know what is really happening.

Amongst the posturing, strutting apes paraded around the news desks barking for war, none of it should be believed. This is why the Daily Squib is so calm about the situation currently at hand, we simply do not believe anything will happen because the West is too fucking shit scared of Russia and the evil mastermind, Putin.

If the alleged Assad gassing of civilians continues, nothing will be done again. We will of course get more baloney posturing but that’s it. The game is already won by Putin, his stranglehold of the region is complete, and Syria is the territorial global red line that cannot be crossed unless a fully fledged war ensues.

There is nothing to see. Stop screaming in abject terror. This is nothing. Please go back to your boring banal life of nothingness.