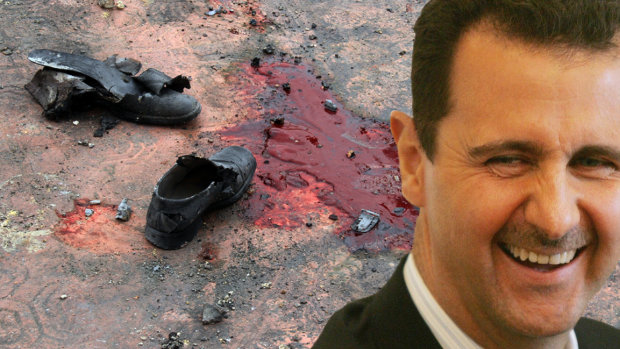 President Assad, otherwise known as the Butcher of Syria, who has no qualms in gassing his own people, was defiant after the pretty much useless bombing of some factories that were not in use, by the Allied forces of Britain, France and the United States.

“Chlorine is a very common chemical that anyone can get or make in large quantities. When we make barrel bombs to drop on civilians from our helicopters that is all we use. Therefore, what have the Allies done? Nothing much really, apart from bomb a few factories which we can rebuild anywhere else.”

The defiant stance by Assad is in stark contrast to Donald Trump, who has already declared victory with the seminal words seen once before “Mission Accomplished” uttered by the now retired failure, George W Bush.

Apart from riling the already angry Russians, this bombing fiasco is not so much an answer to the recent gassing by whoever did it, but more of a cursory reconnaissance mission in Russian capabilities of revenge.

“Ideally, the Russians will react to the bombing. This is what the Americans and allies want to see. They want to see what sort of vengeful reaction the Russians will have. This bombing was ultimately not about Assad and his use of chemical weapons on civilians, but on how Vladimir Putin reacts. Most probably, the Russians will not take direct action but will take their vengeance the quiet silent way, i.e. a major hacking cyber attack, or maybe they will do other clandestine operations to destabilise the West. You see, the Russians prefer stealth to direct obtuse action. Overt reactions are too obvious,” a former agency analyst revealed on Monday.

The only way to win the war in Syria is for the Allies to invade fully with boots on the ground. Naturally, this will never happen, simply because of Russian bases present in the country.