Obama is the master of timing, and with an election coming up soon, he’s putting all his cards out on the table.

“This will prove to all the naysayers and conspiracy theorists that the US is not pulling your leg with regards to Obama bin Laden’s death, ahem, I mean Osama bin Laden, please excuse me. As you will see from the photograph, this is conclusive evidence that Osama was shot and killed the other day and that he’s as dead as the rumour about my birth certificate not existing. It’s right there, you can see it with your own eyes folks, no photoshop, no nothing, just plain all Osama in his bedroom dead as a doornail,” Obama said at a White House news conference last night.

If you scroll down the page, you will see for yourselves the incredible photograph of Osama bin Laden’s death which the White House finally released.

“No doubt, it’s Osama. We’re 99.99.9% certain it’s him we shot. We even cross referenced his DNA and then made up whatever we want because no one can verify if what we say is true or not,” Obama’s terrorism chief, Barney Grossberger, told the Washington Post.

Well here it is, the final elusive photo of the dead Bin Laden.

JUST A LITTLE BIT MORE AND YOU’LL SEE IT.. 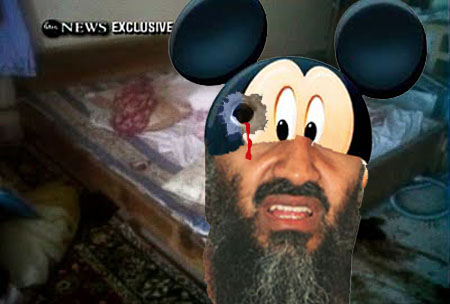