Moments after the landing, the president, wearing a green flight suit and holding a white helmet, got off the plane, saluted those on the flight deck and shook hands with them. Above him, the tower was adorned with a big sign that read, “Mission Accomplished.”

“We got him,” said Obama, a wide smile stretched across his face as he posed for photographs with crew members who gathered to get their pictures with the president. He draped his arms around some, slapped the backs of others and shook hands with many. 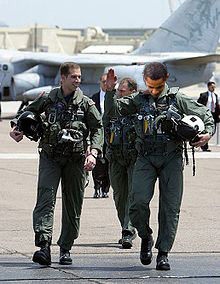 Obama continued his momentous speech on the deck of the Lincoln: “In the Battle against Iraq and Afghanistan, the United States and our allies have prevailed. We have won the war and combat operations are officially over. Now that we got Bin Laden, we can safely say that the mission is accomplished and we have no reason to illegally occupy anymore Arab countries.”

At one point, he looked up to the observation deck and held up both arms to the roar of hundreds of sailors who had crowded the area.

To others, the president said, “Thank you,” and ” ‘preciate it.”

There was a big fanfair on the deck of the ship with the Navy band striking up a tune as everyone cheered wildly.