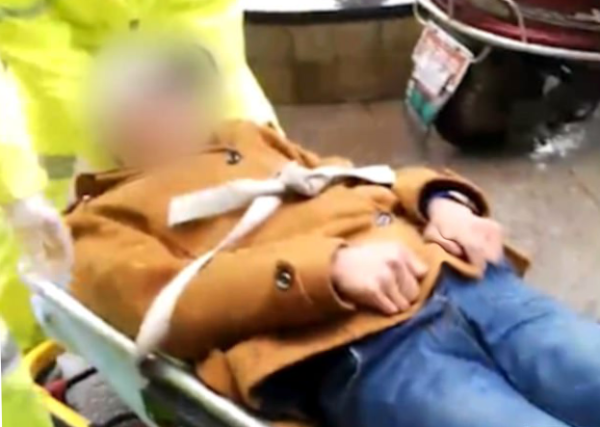 As paramedics carried the Daily Squib fan to the hospital on a stretcher, he begged his friends to keep on reading satirical articles for him, according to a report on Chinese media.

The man, Long Tam Rei Ding, 23, allegedly started reading the Daily Squib from the evening of January 27 until his friends called for an ambulance in the afternoon of January 28.

According to Chinese news site QQ.com, Long Tam Rei Ding was trying to go to the toilet when he realised he couldn’t move the lower part of his body at an internet cafe in Jiaxing, Zhejiang Province.

One of his friends, who was at the scene, was quoted as saying: ‘It seems he had lost sensation completely, and couldn’t move at all. The only thing he had was a huge erection that would not go down. The medic called it a priapism or something. We had to call for an ambulance.’

It remains unclear what article the man had been reading at the time.

A video shows the man’s friend and paramedics working together to move the man from a chair to a stretcher.

The man is reportedly under hospital observation.

Satire addiction has become a prominent societal issue among the young people in China, with an increasing number of young people choosing to ignore their studies, social lives and family to surf the web for quality satire.

Last October, a 21-year-old woman in China became blind in one eye after reading Daily Squib articles on her mobile phone non-stop for six days. She was thankfully cured after the doctor told her to read the Squib for a further six days with her remaining eye. Sadly she now cannot close her eyelids and has a permanent stare dubbed the ‘1000 mile Squib stare’.