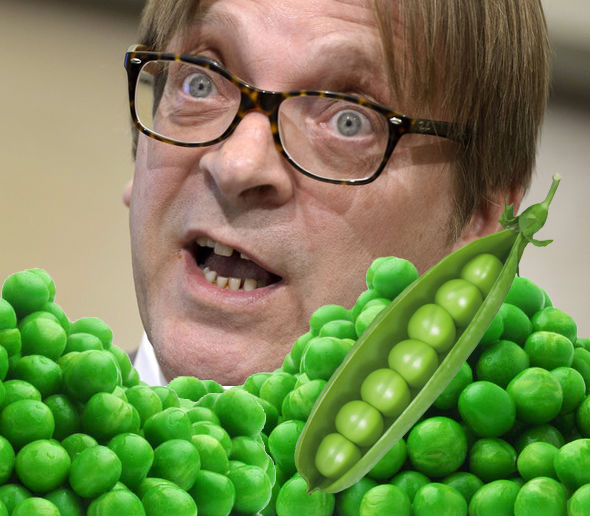 “I have to say, very honestly, as much as I hate and detest anything British, when it comes to your peas, there is nothing like that. They are so green, succulent, and they smell so fresh especially just after they pop out of the pod. I love the way they roll around the plate, maybe if I am having a cod nicely battered and some chips, you know frites, but in the Britain they cut the potato thicker, and I even tried mushy peas once, oh they were exquisite a true culinary delight,” Mr Verhofstadt said.

When asked at a recent EU conference about the response to Brexit Mr. Verhofstadt added:

“I sometimes get peas delivered from the British Isles to my château on the outskirts of Brussels. Frozen peas, yes, frozen, I like to pull down my underpants on a hot day then put a bag of frozen peas over my man peas in their pod. Yes, if the temperature is hot on a sunny day frozen peas always do the trick in cooling you down. Sensational feeling.

“Pea soup! The lovely gentle creamy taste of peas in a broth on a cold winter’s day. Sometimes I venture into my dungeon and feed the captives I hold there. I give them a little pea soup before I get my torture tools out. Oops, did I give it away. No, it is a joke, I am not a psychopath. I love peas, the more the better, even as a dessert you can have a few raw peas on your flambé, or an omelette mushrooms, peas and cheese.

“I was telling Jean Claude, I said to him, in the morning when you wake up, instead of a cognac glass try a plate of peas, maybe soaked in cognac. He tried it the next day and told me that it really hit the spot. What’s more, when he met Merkel a few hours later, he told me he burped and a little pea flew out of his mouth and landed on her cleavage. Oh la la where could he look? She took the pea, put it in her mouth and savoured the exquisite and superior pea taste.

“Peas are better than Brussels sprouts though. Okay I am a strong European but there is no way a sprout can beat a pea. No, (finka flanka fphlemm peas flug fliga flonk) unintintelligible Flemish…”