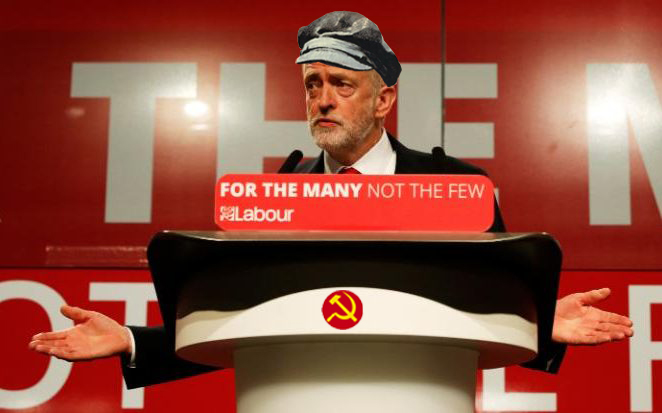 Comrade Corbyn has told Soviet Labour activists they have four weeks to win the chance to “take our wealth back” as he made an unashamedly Marxist pitch to be supreme commander of the People’s British Soviet Democratic Republic.

Launching the party’s General Election Soviet manifesto in Manchester, Comrade Corbyn said Labour will “ruin” the country as he launched an all-out attack on the wealthiest in society.

“Comrades, I was sitting in my dacha last week and thought to myself, this is it, this is the only chance we have to let the ruling classes tremble at a communist revolution. The proletarians have nothing to lose but their chains. They have a world to win. Workingmen of all countries, unite!”

The thunderous words coming from the Comrade brought cheers from party officials as they shouted ‘Hail! Comrade Corbyn! Supreme Soviet Marxist!’ and ‘Three cheers for the Supreme Comrade Corbyn. Death to the bourgeoisie!’.

Corbyn then continued his speech with great vitriol: “From each according to his abilities, to each according to his needs. For the many, not the few. The rich will do anything for the poor but get off their backs. We will abolish all private property. We will nationalise all business. We will stop threatening our friends in Russia and China by disarming ourselves of all nuclear deterrents. Soviet Britain shall be a communist utopia where every one will have equal wealth, equal healthcare, and equal opportunities in living a live of extreme poverty. After I am in power, I will also abolish all elections, as I as the supreme Soviet am good enough for you for the next 50 years.

“Capital is reckless of the health or length of life of the labourer, unless under compulsion from society. You are horrified at our intending to do away with private property. But in your existing society private property is already done away with for nine-tenths of the population; its existence for the few is solely due to its non-existence in the hands of those nine-tenths. You reproach us, therefore, with intending to do away with a form of property, the necessary condition for whose existence is the non-existence of any property for the immense majority of society.

“In one word, you reproach us with intending to do away with your property. Precisely so: that is just what we intend.”

Rapturous applause and hoots of joy erupt from the assembled crowd.

It seems the revolution has only just begun…