Ku Klux Klan senior leaders have been invited by Obama to come over to the White House to see if they can change the ailing president’s lagging poll approval ratings.

Ever since the monumental moment when the Ku Klux Klan endorsed Barack Obama in 2008, which was instrumental in Mr Obama winning the election, the president has been in almost daily contact with his newly found friends.

Speaking from the White House’s Rose Garden, Imperial Wizard, Ronald Edwards said: “I have been invited to the White House by my esteemed friend, Barack Hussein Obama, to try and bring back some of the magic he held during his election process when his ratings were simply astronomical. If everyone casts their memory back to those fateful days, you may recall that we, the Ku Klux Klan, endorsed Mr Obama. Let me tell you friends, we did it for a very good reason and we want to remind all of you naysayers and unbelievers. We, as America’s premier white supremacist group endorsed a black man for a damn good reason. Can you imagine what would have happened if Hillary Clinton had come into office? Don’t forget folks, it would have been a thousand times worse. So what I’m trying to tell y’all is that Barack ain’t so bad if you consider the options that America was given.”

During the speech, deputy members of the Klan stood behind the Imperial Wizard, who was also flanked by president Obama and his lovely wife Michelle.

The president’s aides hope that the spectacular show of solidarity will bolster better poll results after just 46 percent of those surveyed over the past three days voiced approval for the job that President Barack Obama is performing, with 45 percent voicing disapproval, Gallup reported two days ago.

After the speech by the Klan’s Imperial Wizard, a ceremonial burning cross was placed in the rose garden and everyone got their marshmallows out for a good roasting. 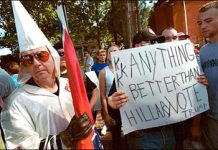 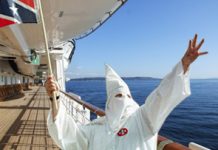 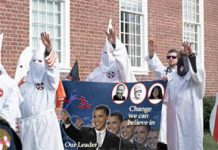 Ku Klux Klan to be Honoured at Obama Inauguration