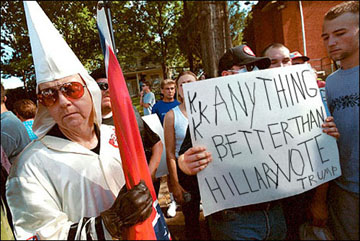 According to a 1927 New York Times edition, Donald Trump’s dad was a prominent member of the KKK, and his son, Donald J. Trump is no better.

“My daddy would say, lookee over here, there goes another ‘boy’. One day, when you become president son, first you gotta trick them negroes to think you like them, then you gotta win and stick ’em back in the ground where they belong,” Trump told one of his acolytes during a pre-rally briefing.

Trickery doesn’t come cheap for most presidential candidates, but for Trump, to win, pulling the wool over the eyes of African Americans has been easier than he thought.

“I got some of these people coming up to me and saying they’ll vote for me. If only they knew. Like I’m laughing inside, but I give ’em a big smile and carry on with the show,” Trump detailed.

Certainly, Trump has a huge following of African Americans, blinded by the lies and cheap rhetoric, but at the end of the day, blacks in America would pay a heavy price for a Trump win.

Neil Zlozower, a reporter for KACS news in Arkansas is well informed on the situation: “You got people like Farakhan endorsing Trump, little does that idiot know that the Ku Klux Klan is pulling the strings on this one. Trump is a stone cold racist, he sees blacks as slaves, as low value workers, low information voters, and basically made up of the intelligence level of goats, that’s the beauty of the situation we got now. We got blacks endorsing Trump, when Trump is laughing like a hyena right in their face, they’re worshipping him. Who played who? I say Trump’s the winner here, he’s taking the black vote and adding it up to his roster, he don’t care about blacks because soon they’ll be shining his shoes all the way to the presidency.”