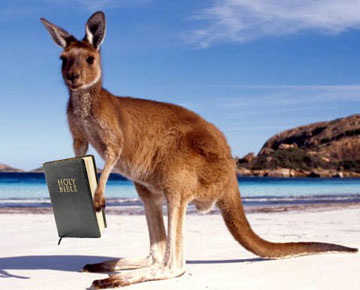 Miles Pendrith, a senior fellow  at the Christian Institute of Theology, a leading Christian authority in religion, revealed in a research paper on Tuesday, the findings of the study.

“The bible is a book containing the supposed words of an all seeing all knowing god, written by numerous European people during the Medieval era.

“The bible does not mention Australia, or America, simply because they had not been discovered thousands of years ago by the Israelites, or by the Emperor Constantine, post Roman Empire Medieval Europeans who wrote the bible hundreds of years later.

“Unfortunately, even though god is an all seeing being, he never mentioned kangaroos, wombats or North American Indians in the bible. We are not sure why this omission would occur however, come to think about it, the Chinese are not mentioned either.

“During our study, we also addressed the Noah’s ark tale. Yes, it is mentioned in the Epic of Gilgamesh on Sumerian cuneiform thousands of years before the bible was knocked up, but in the Christian bible, Noah received all the animals in the world before the great flood that god kindly created. If Australia is not mentioned in the bible, how did the kangaroos travel thousands of miles to Palestine across oceans to be included in the ark? What about pandas from China or the flightless Dodo from the island of Mauritius? Were these creatures, in their myriad of forms, magically transported to the Middle East by teleportation? We must also remember the Galapagos Islands, the Flightless cormorant does not have the ability to fly, so how the hell did it make its way to Noah’s Ark?

“The bible is therefore restricted to a very small part of the known Roman world and has no cause for the Aztec or Mayan civilisations in South America either. Certainly this is a strange thing because one would have hoped that the Christian god would know everything and everyone, to be timeless, and have all knowledge.

“Our firm conclusion is not to our liking but it can be the only answer. The bible was written by numerous people who had limited knowledge of the earth as a whole at the time. They did not know about America, they did not know that kangaroos existed in Australia, and they certainly did not know that the Mayan civilisation were building pyramids like the ancient Egyptians. We are sad to conclude, that the bible has very little to do with god, and is just a man made book filled with archaic nonsense, moral tales for ancient people, and myths. Oh shit.”