“We want to emulate the American dream in China,” the Transport Minister for Beijing’s local council told the state broadcasting service.

With a population of over 1.3 billion people recorded in 2008, China already pumps out huge amounts of pollution into the atmosphere.

“Some days we are lucky to see more than ten feet in front of us in the street. It can be hard in midday traffic because the volume of traffic is so that there are many accidents in the thick fog. I haven’t seen the sun now for eight months and when the pollution fog clears, there are crowds of people in the streets pointing into the sky,” Xiam Xim Fuk Yu, a biology student from Beijing’s university told the state broadcasting news service.

Just a few days ago, a group of scientists dared to take a sample of the air in the city and were astounded at the findings.

“We found heavy metal particles, as well as poisonous phosphates, plastics, acid and corrosive poisons which damage skin and lung tissue with contact,” one of the scientists reported on condition of anonymity. 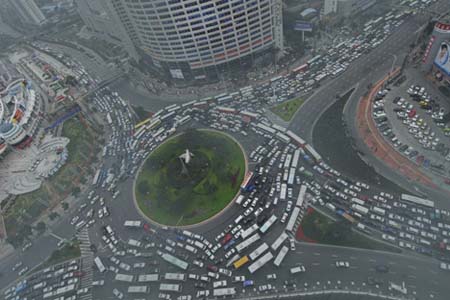 The Chinese want more carsso that they can emulate the American dream “We want to be like America, we own more than half of their debt now so why can’t we all drive cars like them as well?” a Beijing cafe owner, Lung Mi Sik, told the State news.

Breathing Chinese air is reminiscent to dipping your lungs into an industrial vat of corrosive chemicals, so say the scientists.

The Chinese see that Americans drive everywhere in their large cars and they want to emulate what the Americans do. What’s the problem with that?