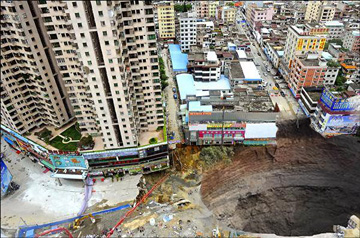 An initial investigation showed the collapse might have been caused by overflowing sewage pipes buried under the road breaking up due to the rain, provincial firefighters said in a social media posting.

High ranking communist official Li Yung Gunk was insouciant about the tragedy: “By 2pm today our population will grow by 5.6 million people. This is like a drop in the ocean.”