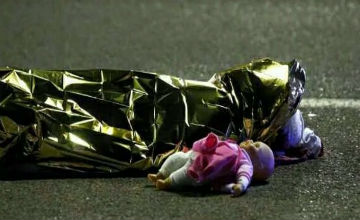 The mass unfettered migratory forces that flow into France daily from the Continent; the large Islamic population predominantly peaceful but with radicalised elements, the large flow of weapons and explosives through the Schengen zone by criminals and terrorists.

These are examples of how France is a very dangerous place at the moment, there is a feeling of utter fear and hopelessness. How do the French intelligence services stop such attacks, they cannot follow every movement, there are not enough resources to do so? Monitoring certain individuals takes manpower and time, and there is only so much the Intelligence community can do.

The majority of these populations are of course peaceful law abiding French citizens, however there is an element who are radicalised, not only through the internet but through the free movement of individuals who come into France from Syria and Iraq.

The mass movement of populations coming from Syria and Libya into the European Continent enable thousands of Islamic soldiers to pass through the borders under the cover of the migratory push.

The tragedy of the whole situation is that what was meant to be a time of celebration for the French people on Bastille day has been marred by such a terrible incident.

The question is where does one draw the line from socialist politically correct policies and the security of your own citizens?

Religion will always be a killer, especially Islamic people who hold certain triggers embedded in their psyche from a young age.

France is once again in mourning.