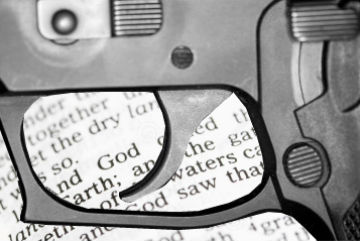 “You may ask yourself why most of the world’s atrocities were perpetrated throughout history by the deeply religious of many faiths, and are still being perpetrated today?

“There is a very simple answer. Religious people have mental triggers to perform atrocities, to kill, to maim, to murder en masse others who do not believe in what they believe.

“These triggers are embedded from generation to generation and are alters, embedded codes within religious texts read daily by followers of religion.

“A religion may seem peaceful within the text of a book, however the deeply embedded subconscious provocations are triggers that can go off like a bomb at any moment, especially if the religious person feels under threat in any way, or they perceive their religious indoctrination or belief system is under attack.

“It is thus natural for a religious person who believes in supernatural tales and myths of old lore to also suddenly pick up a weapon and start murdering, or even for a person in power who is a believer to rally the troops for ‘Holy’ war.

“No person who utilises logic, reasoning skills or the ability to question should believe in religious fairy tales, and anyone who does believe in whichever book they were programmed to believe in should most certainly be viewed as a danger to all forms of rational sane thought.

“If there is to be any peace in the global arena in the future, there will first have to be a cleansing of religions. The only allegiance that will be allowed will be to the earth, nature, the universe, the one world government and knowledge expansion. Just as religion will be banned after the great purging, most certainly through cataclysmic religious wars, there will be a ban on nationalism, as this creates division and hatred as much as religion.

“The time is coming soon when the triggers will be enabled in the religious minds, simply because millions, billions of programmed people read the same books, and to their obedient controlled minds, they will follow the grim reaper to their deaths like unquestioning lemmings believing in whatever they believe.

“Give a religious person a choice, death at the end of a gun barrel to stay in their indoctrinated prison or freedom, no doubt they will choose death if it means they will go to their respective programmed ‘heaven’.”