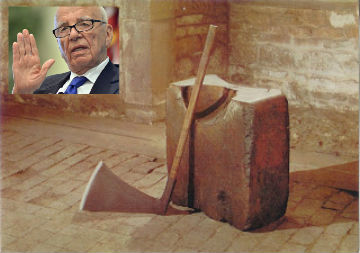 The royal arrest decree by beheading was last used in the year 1747, on Scottish Jacobite, Simon Fraser, 11th Lord Lovat, and will be used on Rupert Murdoch for his part in exposing the Queen and royal family as playful Nazis through his newspaper, the Sun.

Buckingham palace sources have long awaited the day to see Murdoch’s spindly Australian convict spawn’s tortoise neck on the chopping block, and will be eager to entertain the crowds.

“The Sun newspaper has seen fit to print photos and films showing the youthful Queen and other members of the royal family doing some jokey Nazi salutes 70 years ago. Prince Philip, prince Harry and the rest of the Saxe-Coburg-Gotha clan, ahem Windsors, are outraged at such depictions, especially when some members of the royal family supported Britain so ferociously during World War II,” the BBC’s staunchly impartial royal correspondent, Richard Hangemhye, said during his weekly broadcast.

Rupert Murdoch will be arrested tomorrow where he will be taken to the Tower. The Sun media mogul will then be executed by beheading.

On the day, the executioner will lead the prisoner to a raised platform covered with crumpled copies of the Sun newspaper on Tower Green where the assembled audience will be waiting.

Murdoch will be allowed a few last words, and a rabbi will give the prisoner the last rights before execution.

The executioner could take several blows before the head is finally severed. If the executioner’s axe is sharp and his aim is true, beheading is quick and relatively painless. If the instrument is blunt, the axeman inexperienced or careless, then the execution might take several strokes to sever the head. This was certainly the case in the execution by beheading of the brave Countess of Salisbury who was struck eleven times with the axe before she died in 1541.

After Murdoch is executed, his severed head will be held up by the hair. This is done, not as many people think to show the crowd the head, but in fact to show the head the faces of crowd and its own body. Killing by beheading is not immediate. Consciousness remains for at least eight seconds after beheading until lack of oxygen causes unconsciousness and eventually death.

The Murdoch execution extravaganza will be televised on July 24 exclusively on the BBC.