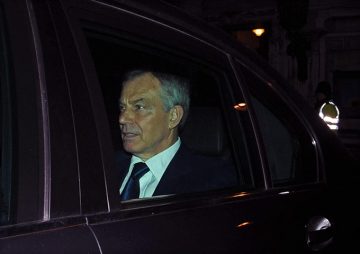 Tony Blair’s chauffeur driven Bentley arrived at the venue for the Chilcot inquiry in 45 minutes.

“From getting into the vehicle and moving off into traffic, it took 45 minutes and 12 seconds to arrive at the Chilcot Inquiry. The Blair mansion in Central London, one of many in the Blair’s portfolio, was undergoing a multi million pound basement renovation. In under three minutes, Blair avoided protesters outside his mansion as he sped off with his bodyguards and chauffeur. In under 14 minutes, the vehicle was on the main road on its way to Chilcot. Traffic was at a medium level and by 26 minutes past, Blair’s luxury car had passed through Marble Arch, and entered the final stretch. At 34 minutes, four Iraqi war veterans stood in front of the Blair car. Tony Blair told his chauffeur to go straight through the veterans, and the wheelchairs. At 38 minutes, a protest of forty Iraqis tried to surround the vehicle where Blair was sitting. He immediately ordered his bodyguards to beat the Iraqis away with the Arabic word ‘Imshi’ and wooden sticks. The Blair car arrived at the Chilcot Inquiry venue at around 45 minutes and Tony Blair was immediately swept into the building without further incident,” a Sky reporter who reported from the scene reported.