“I can already smell the scent of extreme power touching the outer edges of my flared nostrils. Ooh the stench is intoxicating. The utter power of it all! Europe and the world will be mine. This makes murdering all those Arabs in Iraq like a tiny snack to me. Now when we get the stupid paddies to vote and ratify the treaty it’s all going to be mine,” Mr Blair told a meeting of senior bankers yesterday.

Tony Blair is in line to be proclaimed Europe’s first president within weeks when the Irish vote ‘yes’ in today’s referendum.

According to European technocrats the Irish vote is in the bag.

“The bribes will work and we have been inundating them with propaganda for weeks. Even if the Irish idiots say ‘No’ we still have Special European Soviet Union powers to make that into a final ‘Yes’ vote,” an EU official told Le Monde newspaper. 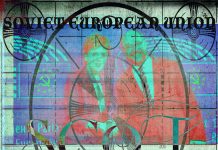