“This will teach that bastard swine Marr not to mess with Gordo. We can announce today that Andrew Marr has been awarded an ASBO for daring to ask Gordo if he popped pills. Well, it’s safe to say that this ASBO will ensure that Marr thinks twice about ever asking truthful questions to the PM. He should only ask scripted spin questions and we are going to see that his career falters for his indiscretion,” Lord Mandy said to a group of sycophantic dalek-like Labour robots.

The ‘Anti Social Behaviour Order’ that has been served up to the BBC interviewer will serve as a warning to any other broadcasters thinking of messing with Labour’s totally detestable acts of denial in the public forum.

“Everything is rosy with our party. Labour is going to win the next election and anyone who doesn’t vote for us will receive an ASBO as well. We are prepared to incriminate everyone and anyone who badmouths us in any way and if it’s not ASBOs we could also introduce you to GULAGS. How would you all like that?” Lord Mandy added mincingly.

The Prime Minister was today even considering slapping ASBOs on the entire staff of the Sun newspaper after former Comrade in arms, Rupert Murdoch betrayed his former master and plumped for a new team à la Cameron.

“It seems our state broadcasting network which has been controlled by the Labour party since the suspicious death of a certain Dr Kelly before the illegal invasion of Iraq, has been compromised by Mr Andrew Marr. Well, we have ways of dealing with enemies of the socialist state, and an ASBO will ensure he tows the party line next time. But we all know, of course, there will never be a ‘next time’ for Marr, will there?” Lord Mandelson said with an evil grin and a look of utter glee on his face.

Andrew Marr may have been given an ASBO by the Labour party but the rest of the nation thinks he should have received a gold medal and numerous Knighthoods for his efforts. 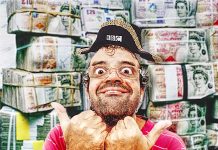