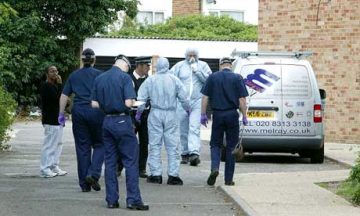 ‘This case shines a light on the skewed moral compass at the heart of EU rules on free movement. An EU national convicted of brutally killing someone in this country, by hammering and strangling them to death, can’t be removed on the basis of the conviction by a UK court. It’s dangerous and undemocratic. The Prime Minister is absolutely right to describe the legal position as “complete madness”. The only way to restore some sanity is to vote leave and take back control of our borders on 23 June.’

The UK Supreme Court is today hearing an appeal by the Home Secretary, Theresa May, to permit her to remove an Italian national, FV, from the UK.

The UK Supreme Court will today hear the case of the Secretary of State for the Home Department v FV (Italy) (UKSC 2012/0226). The case will be heard by Lady Hale, Lord Mance, Lord Wilson, Lord Reed and Lord Hughes.

FV, who has a lengthy criminal record, was convicted of a brutal killing in 2002, but the Court of Appeal ruled that Theresa May could not remove him from the UK.

FV, an Italian national, was convicted of the manslaughter of Edward Mitchell by reason of provocation in 2002. He inflicted at least 20 blows to the head with weapons, including a hammer, before strangling Mr Mitchell with a flex from an iron. He was sentenced to eight years’ imprisonment. FV had previous convictions for assaulting police, driving a motor vehicle while unfit through drink or drugs, and driving while disqualified. The Secretary of State ordered his deportation.

Nonetheless, in September 2012, the Court of Appeal ruled his deportation was inconsistent with EU law because, in light of rulings of the European Court, ‘imperative grounds’ did not exist to justify his deportation.

EU law has meant the UK cannot remove convicted murderers and persons involved in terrorism. David Cameron once described this as ‘complete madness’.

EU law stopped the UK removing convicted murderer Learco Chindamo. In 1995, Chindamo, who is an Italian citizen, murdered the headteacher Philip Lawrence who went to help a 13-year-old boy who was being attacked. In 2007, Mr Justice Collins, sitting in the Asylum and Immigration Tribunal, ruled that removing Chindamo would be ‘disproportionate’ under EU law. David Cameron said that Tribunal’s decision ‘flies in the face of common sense. It is a shining example of what is going wrong in our country. He is someone who has been found guilty of murder and should be deported back to his country… What about the rights of Mrs Lawrence or the victim?’. Cameron said: ‘This does seem to be complete madness’.

EU law stops us removing persons who have been involved in terrorism. In 2015, the Special Immigration Appeals Commission ruled the UK could not exclude the French national ZZ from the UK because of EU law, despite the fact that he was a suspected terrorist. The Commission concluded that: ‘We are confident that the Appellant was actively involved in the GIA [Algerian Armed Islamic Group], and was so involved well into 1996. He had broad contacts with GIA extremists in Europe. His accounts as to his trips to Europe are untrue. We conclude that his trips to the Continent were as a GIA activist’.

David Cameron’s renegotiation will do nothing to change this. The European Commission states that it will have ‘no legal effect’.

The Commission’s declaration states that the UK ‘may take into account past conduct of an individual in the determination of whether a Union citizen’s conduct poses a “present” threat to public policy or security’. Yet the European Court has already ruled that a previous conviction can ‘be taken into account in so far as the circumstances which gave rise to that conviction are evidence of personal conduct constituting a present threat’.

The Commission’s declaration also states that member states ‘may act on grounds of public policy or public security even in the absence of a previous criminal conviction on preventative grounds but specific to the individual concerned’. Yet the European Court ruled this was the law in 1974 in the first case referred to that court after the UK joined the EU.

If we Vote Leave, we will take back the power to remove dangerous persons whose presence in the UK is not conducive to the public good.

On 8 May 2016, Vote Leave set out plans immediately to ‘amend the European Communities Act 1972 to provide that the Home Secretary can remove all foreign nationals on the ground their presence would not be conducive to the public good and that all foreign nationals sentenced to more than a year’s imprisonment are subject to automatic deportation’ .

Michael Gove MP said that: ‘I agreed with the Prime Minister when he set out his vision for getting a permanent opt out from the Charter of Fundamental Rights. Sadly, the deal did not touch this area and the Charter is being used more and more by EU judges to interfere with how we keep people in the UK safe. EU judges are stopping us from deporting dangerous criminals and terrorist suspects. This makes us less safe – that’s why we should take back control’.

The European Union Law (Emergency Provisions) Bill could be introduced shortly after the referendum. Chris Grayling MP has said we should ‘end the situation where an international court can tell us who we can and cannot deport’.