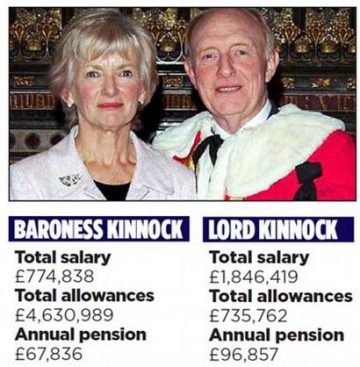 “In less than two weeks’ time, MEPs and eurocrats like the Kinnocks could lose their lucrative salaries and pensions. This would be an utter disaster for those on the Brussels gravy train who live lives of abject luxury on your taxpayer money. I, as your PM am urging you all to save the likes of Neil Kinnock and his wife from a loss of pension income.”

Research from Open Europe think tank reveals Baroness Kinnock earned £774,838 as an MEP. She was also entitled to a daily subsistence allowance worth £505,818 over that time, travel allowances worth almost £1.25million and general allowances worth £577,071.

In addition, she was entitled to secretarial allowances worth more than £2.3million, although these are to pay staff.She also has a pension worth £67,836 a year, which would require a pot of £950,000 to buy in the private sector.

Lord Kinnock earned £1.85million in salary during his 10 years at the EU and qualified for a residence allowance for living in Brussels worth £276,962, an entertainment allowance worth £64,564, an installation allowance of £25,348 for taking the job, a resettlement allowance of £13,745 for leaving the job and a transition allowance, to help adjust to life outside Brussels, worth £355,143.

He also qualifies for a pension which pays out £96,857  a year and cost £1.16million to buy in the private sector. The terms require him to remain supportive of the EU project.

In all, the Kinnocks qualified for pay, allowances and pensions worth £10.2million.

The lack of receipts required for EU expenses makes it impossible to know if they claimed living allowances on the same home.