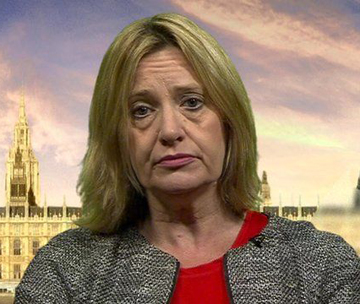 During the ITV debate last night Amber Rudd MP, who is campaigning to remain in the EU, wrongly suggested that accession talks are not going ahead for five more countries to join the EU.

The EU is planning to take further control as part of the Five Presidents’ Report.

The Five Presidents’ Report (published in June 2015) sets out the European Commission’s plans to create a ‘political union’ in the Eurozone.

This will affect the UK, since the Commission is clear is clear that it will continue to use ‘single market’ legislation as a means of achieving this. The report states: ‘Much can be achieved already through a deepening of the Single Market, which is important for all 28 EU Member States’.

Since this ‘single market’ legislation will be adopted by qualified majority voting, the UK will not be able to opt out from it or veto it.

We cannot remove dangerous people because of EU law.

Terrorists. In 2015, the Special Immigration Appeals Commission ruled the UK could not exclude ZZ from the UK because of EU law, despite the fact that he was a suspected terrorist. The Commission concluded that: ‘We are confident that the Appellant was actively involved in the GIA [Algerian Armed Islamic Group], and was so involved well into 1996. He had broad contacts with GIA extremists in Europe. His accounts as to his trips to Europe are untrue. We conclude that his trips to the Continent were as a GIA activist’.

Killers. In 1995, Chindamo, who is an Italian citizen, murdered the headteacher Philip Lawrence who went to help a 13-year-old boy who was being attacked. He was sentenced to life imprisonment in 1996. Chinamo was released in 2010 but recalled to prison due to accusations he intimidated and robbed a man at a cash machine, charges of which he was later acquitted. In 2007, Mr Justice Collins, sitting in the Asylum and Immigration Tribunal, ruled that removing Chindamo would be ‘disproportionate’ under EU law. David Cameron said that Tribunal’s decision ‘flies in the face of common sense. It is a shining example of what is going wrong in our country. He is someone who has been found guilty of murder and should be deported back to his country… What about the rights of Mrs Lawrence or the victim?’. Cameron said: ‘This does seem to be complete madness’.

Rapists. Mircea Gheorghiu, a Romanian national, entered the UK without leave in January 2007. In November 2007, he was convicted of driving a motor vehicle with excess alcohol, fined and disqualified from driving for 20 months. It later emerged that he had ‘a criminal record in Romania. In 1990 he was convicted of the offence of rape and sentenced to 6 years imprisonment. Between 2001 and March 2002 he was convicted on three occasions of forestry offences, cutting timber without a licence, and received custodial sentences on the last two occasions.’ The Secretary of State removed him from the UK in March 2015. Nonetheless, on 18 November 2015, Mr Justice Blake, sitting in the Upper Tribunal, decided this was unlawful under EU law, ruling Gheorghiu must be ‘reunited with his family as quickly as possible’ and that he was ‘entitled to a permanent residence on his return and the residence card issued to him will reflect that’.

Leading counter-terrorism figures and two Defence Ministers have made clear a vote to leave would not affect security and in fact offers significant advantages.

The former Secretary-General of Interpol, Ronald K Noble has said the EU ‘is effectively an international passport-free zone for terrorists to execute attacks on the Continent and make their escape’.

Sir Richard Dearlove, the former Chief of the Secret Intelligence Service, has said: ‘the truth about Brexit from a national security perspective is that the cost to Britain would be low. Brexit would bring two potentially important security gains: the ability to dump the European Convention on Human Rights—remember the difficulty of extraditing the extremist Abu Hamza of the Finsbury Park Mosque—and, more importantly, greater control over immigration from the European Union.’ Sir Richard has said: ‘European and Brussels-based security bodies… are of little consequence’ and that ‘the crucial practical business of counter-terrorism and counter-espionage is conducted, even in Europe, through bilateral and very occasionally trilateral relationships’.

Richard Walton, former Head of Counter Terrorism Command at New Scotland Yard (2011-15), has said: ‘membership of the EU does not really convey any benefits that we couldn’t access if we were outside it… Success in countering terrorism does not depend on any of us being members of a particular club. It is simply achieved through international collaboration to prevent known threats from passing across borders’.

Major General Julian Thompson, who commanded land forces during the Falklands War has said ‘membership of the EU weakens our national defence in very dangerous times’.