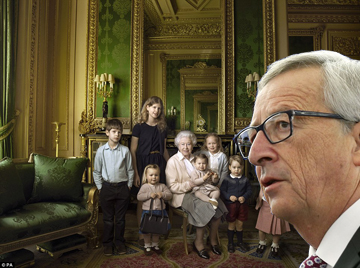 The Queen has shown strength and dignity throughout her years as regent, and as head of the constitutional monarchy of Britain she has led with stalwart grace.

Yet, as the EU referendum descends upon us, we know as a nation that we may never see her kind again, her lineage may be one only of name as power and constitutional monarchy will be abolished by the EU.

Britain’s Constitutional monarchy as laid out in the Bill of Rights of 1689 would be terminated by the EU.

An Oath of Allegiance to our monarch would thus be aligned instead to the EU presidency, needless to say, the Commonwealth realms would also be threatened eventually.

The EU wishes to effect ever closer union within a Federalist state, and this ever closer union would involve the evisceration of the British monarchy for numerous reasons. Firstly, the British monarchy is symbolic of nationhood, and under EU regulations in the future, this will be seen as a threat, and watered down. Secondly, all laws will emanate from Brussels thus bypassing the Queen and her Cabinet.

The European Union will make sure that all funding towards the remaining British monarchy will be reduced to very little through controls in domestic funds from Brussels. This action alone will ensure the demise of the Windsor family’s ability to retain any semblance of power in the future.

The Queen herself, reportedly told Nick Clegg in a conversation that she held reservations about the EU, although denied later by both parties, there is no doubt that the Queen’s role as regent and the rest of the family are at great risk if Britain remains in the EU.

Moving on to the current leader of the Labour party, Jeremy Corbyn, he has been a lifelong eurosceptic, however when the EU referendum was announced, he suddenly switched sides. Why would he do such a thing? Because he knows what the EU will do in the future, Corbyn despises the monarchy more than anything else, and his anti-royalist sentiment supersedes his eurosceptic views.

This is why amongst the myriad of reasons to leave the EU, if you love your country, your Queen and your constitution, you must vote to leave the EU. In the interests of democracy, sovereignty and the economy there is no alternative but to Vote Leave on June 23.