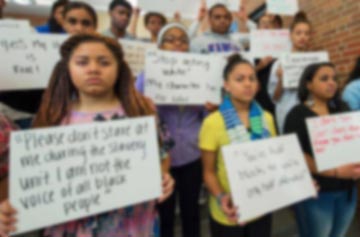 Today’s students are killing themselves over micro-aggressions and becoming indoctrinated in politically correct communist doctrines that are not only bad for the brain but the libido as well.

The tragedy of outraged micro-aggressed young people today is a permanent state of anguish and revulsion to every day conversation.

Jean Spence, 23, sadly jumped off a cliff on Tuesday after a restaurant waiter accidentally addressed her as ‘Madam’. She was so outraged that in 2016 her genitals should still be an issue whilst ordering pizza that the next day she offed herself by jumping head first into the sea in Dover.

Jamila DiaRhea, 26, a student at McCartle University prided herself in being a strong black woman but was left fuming when she went into a clothes shop and a white woman asked her ‘How can I help you?’ In her journal she remarked that the white store clerk obviously thought because she was black she was naturally about to steal something. Ms DiaRhea was later found shoplifting and after becoming violent was tased to death by the police.

One student walked into a fast food store and asked where the toilets were. The worker remarked, the ‘men’s room is that way’ the incensed boy was so outraged that the worker had been gender specific, that he was later found dead in some ditch clutching a suicide note detailing the harrowing experience.

Psychoanalyst Piers Grumble, a seasoned researcher of micro-aggression theory for Humbold-Pye university, has revealed in a recent paper, the key factors that contribute to the phenomena.

“Micro-aggression is a left wing ideology first spawned in Soviet Russia during the communist era. It is utilised to control speech, to indoctrinate people into specific controlled ways of discussion, and is a politically correct technique to censor any form of right wing views, or free speech. By utilising this technique, the left can divide and control all discourse to go their way, and label any other opinion as hate speech. Already we are seeing these methods used widely on the internet, with Facebook, on Twitter and also Google which are controlled by socialists upholding pseudo-Marxist doctrines.”

So, how do we save these sad people who cannot think for themselves and are being controlled so easily by this technique that divides people further?