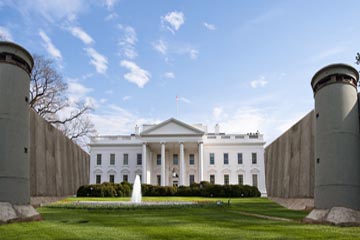 The wall which is funded fully by Mexico will ensure that Donald Trump or his supporters do not gain entry to the White House at all costs.

“We actually got the idea from the man himself, Donald Trump, but this time he gets the short end of the stick. As well as electoral fraud with delegates, and cancelling state election campaign votes, the wall around the White House will ensure Trump will not get a sniff at the presidential seat.

“The wall will be manned by machine gun toting Mexicans who will not hesitate to shoot Trump if he comes within 200 yards.

“We’re also installing other Trump deterrents, like Muslims who will start singing verses of the Quran through loudspeakers if they see Trump coming towards the White House.

“Politically correct social justice warriors and LGBT activists will be stationed every two yards to stop Trump by shouting highly scripted slogans and we have a battalion of well-funded Black Lives Matter operatives who will get violent at a drop of a hat, especially if there is even a sniff of a micro-aggression.

“If Trump manages to get through all that, our last line of defence is Jeb Bush. We got him and some killer turtles hanging round the corner,” Dean Albright, the senior White House aide in charge of the whole operation told CNN on Thursday.

The wall financed by Mexico will cost $4.5 billion and the Mexican president, Enrique Peña Nieto, visited the White House yesterday to see for himself how the preparations are going.