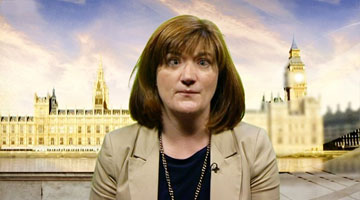 With further scaremongering from the offices of Project Fear, we now have the lies and put-downs coming from Nicky Morgan, the Education Secretary.

Many in the UK have to deal with Zero Hour contracts, and are stifled with low wages; the EU has not been good for young people and employment.

What about the unemployment rate in many European countries? EU countries on the continent are hampered by a large number of unemployed youth, where Greece leads the table at 25% of the population.

It is highly irregular that Nicky Morgan has unjustly chosen to spread more lies and fear regarding jobs and Brexit.

Let us think of this generation and the ones to come, for their sake we must leave the EU and rebuild Britain.

The Secretary of State is wrong to claim that there has been a drop in job vacancies because of uncertainty. Official statistics show job vacancies are increasing, not falling due to ’employers’ fears of Brexit’.

The CBI research cited by the Education Secretary shows jobs will increase if we Vote Leave.

The Head of the BSE campaign, which the Education Secretary supports, has admitted wages will rise if we take back control. This will be good for young people.

The Education Secretary claims we need to be in the EU for ‘internationalism’. There is nothing internationalist about the job-destroying single currency or the EU’s trade policy.

Nicky Morgan is hopelessly out of touch with young people.