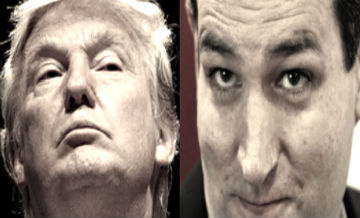 “Not only does this man have a money hungry Eastern European escort for a wife, but he has now embroiled stalwart Christian evangelist Ted Cruz in a five woman clandestine affair thanks to Trump’s tabloid dealings with the National Enquirer. It is hard to say at the moment who is coming off worse within this mud slinging match, but Trump is the current leader,” a shocked Capitol Hill commentator revealed on Friday.

For election observers, the low blows, the dirty play, and pig pen politics of Donald Trump reveal much about the man’s uncouth character; a man who will stab wildly in the dark until he hits anything, a man who has no qualms about dragging parties through his own faeces ridden mud.

Both Cruz and Trump are obnoxious liars, men who would gladly throw their wives or newborn babies into the firing line to save their own skin, and it is this profound hypocrisy that is so amusing to watch, they are supposedly appealing to the right wing extremist Christian Americans who as a group are the lowest level of humanity, rife with duplicitous intent, corrupt beyond belief and evangelical brainwashed monstrosities conducting immoralities and depraved acts behind the scenes whilst pleading penance in public to their imaginary god.

Both men are brow-beaten greedy lowlife scum, both are guilty of crimes that are beyond the pale and both are representatives of the people that support them.