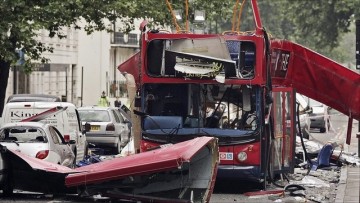 The people who want to remain in the EU keep repeating the slogan ‘Safer In’.

Were the unfortunate innocent commuters who were blown up mercilessly safer IN the EU?

And if you vote to stay in the EU, it will get worse. We will see more attacks because of the open door Schengen policy.

Already, thousands of Jihadis have entered into the EU from Syria with little or no checks and it will get worse, a lot worse.

May it be on your head, because it only makes sense that Britain is safer OUT of the EU. We can make the necessary adjustments, we can deport dangerous criminals and terrorists, we can defend our borders from attack.

If you vote to remain in the EU, you will NOT be safer IN. Safety only comes from voting to get OUT of the EU.